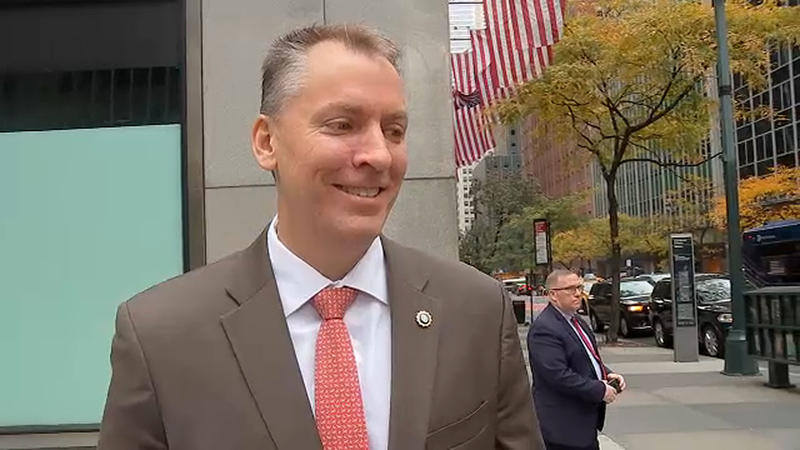 NEW YORK (WABC) -- NYPD Chief of Detectives Dermot Shea will be promoted to the position of New York City Police Commissioner after current top cop James O'Neill announced his resignation Monday, and on Tuesday, he talked with Eyewitness News about his goals and the challenges he faces.

And he says his work has already begun.

"I haven't slept too well the last couple of nights," he said.

And those sleepless nights might just be beginning. There are new criminal justice reforms set to begin in January, just one month after Shea takes on his new role as commissioner starting December 1.

The changes including the "Raise the Age Initiative," which will mean not charging 16 and 17 year olds as adults; and bail reforms, which eliminate bail for a slew of misdemeanor and felony crimes.

The reforms are reportedly a major concern for O'Neill.

"We've been looking at this for a while," Shea said. "We've been putting some plans in place to deal with it, and we will adjust accordingly."

The department is also preparing for new laws that will require prosecutors to turn over evidence quicker.

"There's a lot of work that has to be done in terms of the discovery piece initially, how we set up, how we turn over information, how it's turned over more quickly," Shea said. "So there's a huge component to this that is causing some headaches for our IT people."

Despite the concerns of some, the incoming commissioner is preparing his department and trying to assure New Yorkers that the NYPD is ready for the changes.

"I have faith in the NYPD," he said. "We will do everything we can to keep people safe."

Shea said he will target gang-related violence, work to take guns off the streets, and hopefully continue the city's reduction in crime.

"This is a tremendous honor and a tremendous responsibility and I'm grateful to the mayor for this privilege to serve," Shea said Monday. "Police Commissioner O'Neill has been a mentor and a friend to me, and I am committed to building on the incredible success of Neighborhood Policing and precision policing, while continuing my life's work to eradicate gangs and guns from our streets. Every New Yorker deserves to be safe and feel safe, and that has been my mission since I took the oath and became a police officer 28 years ago. As police commissioner, this will be what drives me."