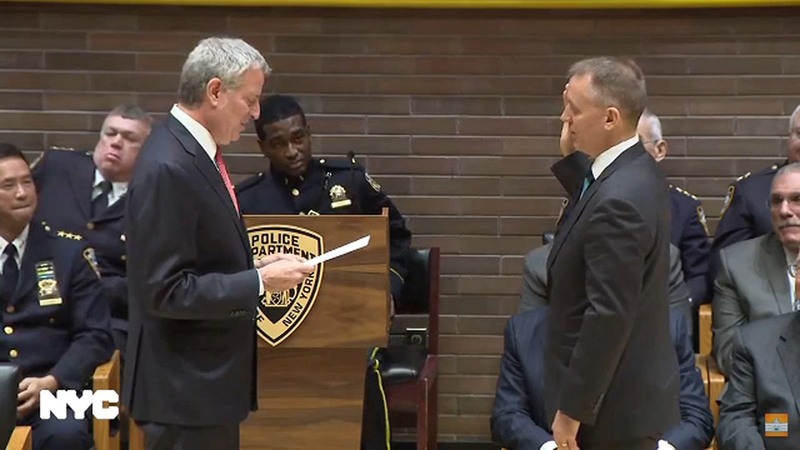 NEW YORK (WABC) -- Dermot Shea has been sworn in as the 44th commissioner of the New York Police Department, succeeding James O'Neill.

The 62-year-old O'Neill retired to take a job as Visa Inc.'s head of global security after 36 years with the NYPD, the last three as commissioner.

As commissioner, Shea has the ultimate responsibility for keeping crime low. He'll also have to contend with looming bail reforms and pressure to reduce arrests, along with dissent among some of the department's 36,000 officers.

The 50-year-old Shea started as a Bronx patrolman in 1991 and gained prominence in the department as a crime stats guru.

Mayor Bill de Blasio says he's "one of the best-prepared" incoming commissioners the city has seen.

Shea was promoted after it was announced that O'Neill would resign from the position of top cop.

As the next Police Commissioner, Shea will apply precision policing and Neighborhood Policing to target gang-related violence, take guns off the streets and continue the city's reduction in crime.

Shea joined the NYPD in 1991. He rose through the ranks working in narcotics, investigations and plainclothes units in Manhattan, Queens and the Bronx. He commanded the 44th and 50th Precincts in the Bronx
He grew up in Sunnyside, Queens, and was one of five kids in an Irish-American family.