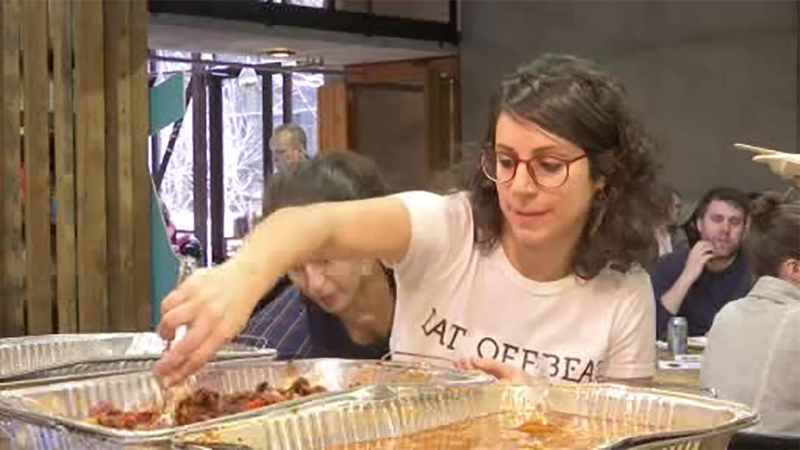 NEW YORK (WABC) -- A food delivery service in Queens is employing refugees and asylum seekers who fled their home countries as chefs, and they don't need professional experience.

Manal Kahi runs "Eat Offbeat" from a small kitchen after emigrating from Lebanon in 2013.

"Eat Offbeat delivers authentic ethnic meals that are conceived, prepared, and delivered by refugees resettled here in New York City," she said. "So we basically hire talented home cooks who happen to be refugees by status. We train them to become professional chefs, and then we deliver."

She started the company with her brother soon after arriving in the US, but a lot has changed over the past year with the proposed travel ban and stricter immigration policies.

"Clearly it has affected us," she said. "Initially, we felt a bit vulnerable. We felt like this hit very close to home, let's say. But at the same time, we really felt a tremendous level of support from New Yorkers, from people all over the states."

In fact, that support has helped business.

"The past two months since the travel ban, our orders have doubled," she said. "So people see us as a way to kind of stand for something, right, and show their connection, the connection between them and people who they want, those people to feel welcome."

Eat Offbeat currently employs chefs from several countries listed on the proposed travel ban, including Syria and Iraq. Other chefs hail from Nepal, Eritrea, and Guinea.

The organization works closely with the International Rescue Committee, which helps settle refugees in U.S. cities. And while some Americans don't want to see refugees come into the country, Kahi remains optimistic.

The company's most recent hire is Narissa, who emigrated from the Central African Republic with her five children. She said she finally feels safe after fleeing her war-torn country.

"The kids have adapted really well," she said. "We had left when we were fleeing war from Central African Republic, and we went to Burkina Faso for a while, but it was still not as safe. Now that we are here, we feel very safe. The entire family feels very safe and they have adapted."

Glory Edim is Kickstarter's Publishing Outreach Specialist, and she has acted as adviser in the organization's pursuit of raising funds for the cookbook. She acknowledges that Americans are divided on more refugees coming into the country, but she remains hopeful.

"The feedback has been mainly positive," she said. "People want to support this issue. They want to find creative things that help change the narrative. They want something to see that is positive, that is affirming."