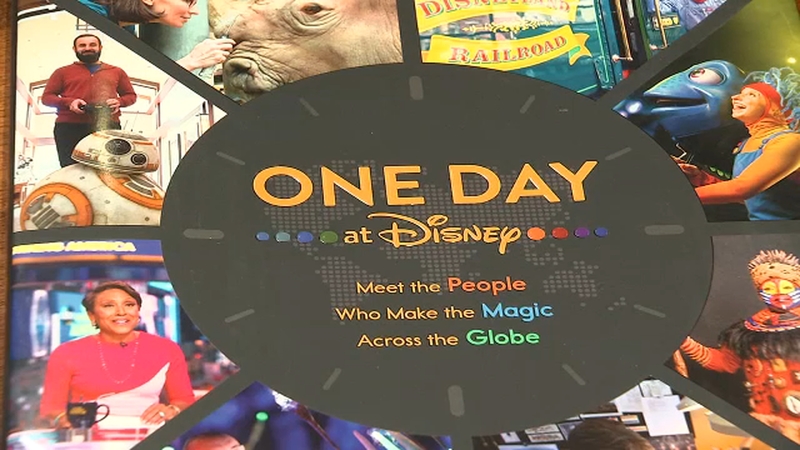 The people who make the magic are the focus of a new book called, "One Day at Disney," that captures one day in the life of employees at Walt Disney.

All the photos inside were shot during a single day: February 21st, 2019.

A day in the life of The Walt Disney Company is captured through the eyes of its people, and the variety of their tasks is amazing.

"I discovered in deciding who to put in the book the most incredible jobs around the company," said Wendy Lefkon, who headed up this project for Disney Editions.

Lefkon has been an employee at The Walt Disney Company for 25 years.

She told entertainment reporter Sandy Kenyon that the most interesting jobs around the company were the ones that she never knew existed.

Dr. Natalie Mylniczenko, a veterinarian, is one of 200,000 Disney employees worldwide, and while she was examining a pregnant porcupine in at Disney's Animals, Science, and Environment sector located in Florida -- Dana Amendola, the Disney Theatrical Vice President, is based out of the New Amsterdam Theatre on 42nd Street.

"While I'm doing one thing in New York City, there's somebody doing not exactly the same thing, but with similar, with the same passion in Tokyo," said Amendola. "So that was neat to me."

The "One Day at Disney" book starts at midnight and goes through all Disney operating hours of a single day: captured by 76 different photographers in 21 cities on three continents. For the most part, these people are behind the scenes.

Some are more familiar. Some are even friends, like KABC Entertainment Reporter George Pennacchio, shown with Brie Larson, who works for Disney's Marvel division in movies like "Captain Marvel."

Well known or not--visible to the public or invisible--the employees depicted throughout the book share a common goal.

"When I read the book I saw all these other people that had the same passion to do it right, to do it the way it should be," said Amendola.

Inside "One Day at Disney," you'll meet a news anchor and also an animator, but who knew Disney also employed an arborist? Even an organist.

It's fun to read this book as a Disney employee, but it's also perfect for die-hard Disney fans who gain new perspectives on parks and pictures and all that this company has to offer.

A documentary based on the book is currently streaming on Disney +.