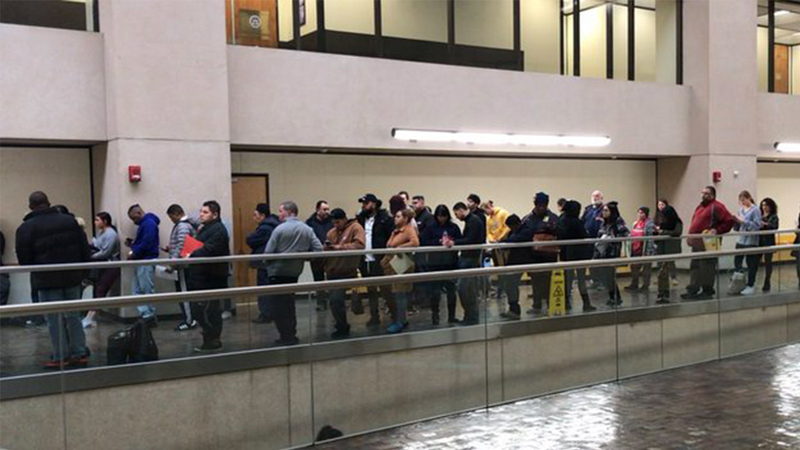 NEW YORK (WABC) -- A nationwide service outage at offices of the Department of Motor Vehicles left people across the New York area waiting in long lines for hours on Monday.

The outage, which occurred from approximately 10 a.m. to 2 p.m. EST, prevented DMV workers from issuing or renewing driver licenses.

People waited up to six hours in line at the DMV in Hauppauge.

"It's very, very hot in there. There's a pregnant woman in there, and it's just uncomfortably hot," Stacy Klein, of Dix Hills, told Eyewitness News reporter Kristin Thorne.

Allison Czeczotka, of East Northport, said Hauppauge DMV workers made an announcement around 10:30 a.m. that the computers were down.

The outage occurred within the database of the American Association of Motor Vehicle Administrators (AAMVA) - a third-party service provider which allows DMV workers to verify personal information of the license applicant.

"During this outage, there was no ability to process messages that support transactions of driver licenses," the association said in a statement. "AAMVA continues to monitor the network and will conduct a full analysis to determine the root cause of the outage."

The issue was compounded by the fact that lines at DMV's across Long Island have been incredibly long in recent weeks due to the passage of the state's Green Light Law. The law allows undocumented immigrants to get driver licenses.

Larry Davis works as a security officer at the New York State office building in Hauppauge, which houses the DMV. He said he gets to work around 6 a.m. and the line is already around the building.

"I must say on a whole everybody's been very cooperative. I haven't had any real outbursts of any kind. People have been patient," he said.

According to DMV Commissioner Mark Schroeder, the DMV also purchased new office equipment and document authentication devices to help expedite license transactions. He said office spaces have been reconfigured and new work spaces have been added.

"We are continuing to make adjustments and hire more staff to further improve the service to our customers," he said.

Customers, especially those needing a permit test, are encouraged to make a reservation at dmv.ny.gov/reservation.

AAMVA said it continues to monitor the network and will conduct a full analysis to determine the root cause of the outage.