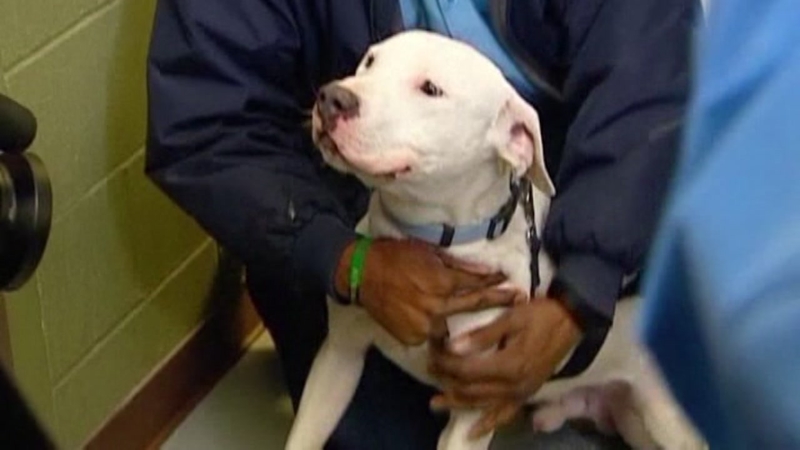 KANSAS CITY, MO -- A former pet owner is facing multiple charges including animal abandonment after dumping a dog near a vacant lot in Kansas City.

The animal was out in the cold for more than a week, but thanks to the efforts of two city employees, it's now safe and sound.

The dog at the center of a most unloving, unfriendly act is Mojave, who is said to be a loving, friendly dog.

"This was as mas as I've been in a long time," says KCMO codes enforcement officer Alan Ashurt.

An act leaving Ashurst brimming with anger after checking images from one of the hidden cameras he uses to catch people illegally dumping trash around 45th and Brooklyn. Only what he saw this time wasn't trash but Mojave.

the SUV in this series of pictures pulls up, someone inside then pushes out Mojave to the street and drives away with Mojave following in vain.

"I just couldn't believe it," Ashurt says. "It was a beautiful little dog, he's sweet as he can be and then somebody just pitching him out."

Finding Mojave out in the cold sure seemed like a long shot. You see, when Alan Ashurst first saw those photos was while he was changing out a camera. That was back on December 18th.

The thing is, the pictures of Mojave being left behind had a time stamp of December 10th. More than a week had come and gone.

"I said, hey, the dog is still in the area," says animal control investigator Erin Dawkins.

The animal control investigator was asked to look through other photos in the camera and days after Mojave was left behind.

The motion activated camera had snapped other pictures of Mojave still in the area.

Dawkins and Ashurst rushed back out and didn't have to look long, especially after opening a can of food before Mojave came bounding out of brush.

Despite spending a week in the woods, the pup is healthy and has recently been adopted.