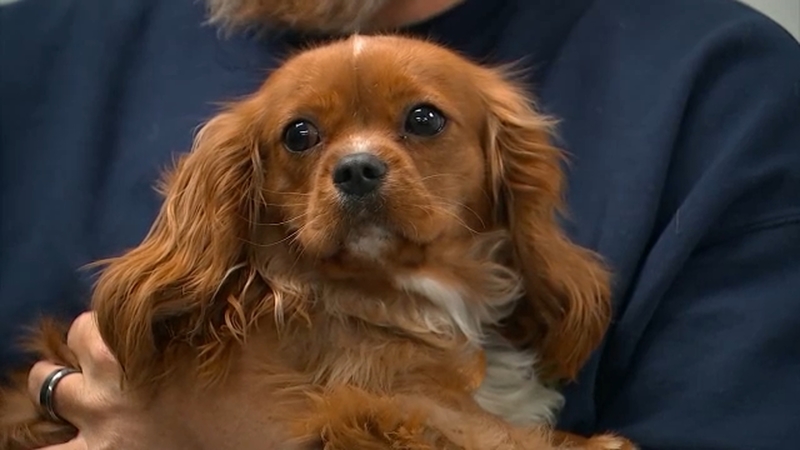 HEMPSTEAD, Long Island (WABC) -- The dog seen in a fraternity party video being forced to do a keg stand is now in the care of the Nassau SPCA. The owner of the dog surrendered the dog Monday night.

"He felt it was the best thing for him to do," said Nassau SPCA Det. Matthew Roper.

Roper said Buddy, a 10-month-old Cavalier King Charles Spaniel, is in good health. He's being cared for at a veterinarian's office on Long Island.

The video, which went viral on social media, shows Buddy's owner -- a senior at Hofstra University and a member of Alpha Epsilon Pi -- and another fraternity member forcing the dog to drink from a keg during an off-campus party at a fraternity house Saturday afternoon.

The SPCA visited the owner Monday and informed him he would need to take Buddy to a vet Monday to have blood tests and other exams performed. The SPCA was unable to seize Buddy because the dog was living in good conditions at the fraternity house with plenty of food and water.

Roper said when they checked in with the owner Monday night, he informed the SPCA he did not take Buddy to the vet.

"We decided at that point in time that we needed to take the dog and get immediate veterinary care for the dog," Roper said.

The owner signed Buddy over to the SPCA.

"He's evidence right now, so we have to keep him safe and healthy," Roper said. "Once the case goes to adjudication, goes to court, we'll find a place for him."

The Nassau DA will decide whether criminal charges should be filed.