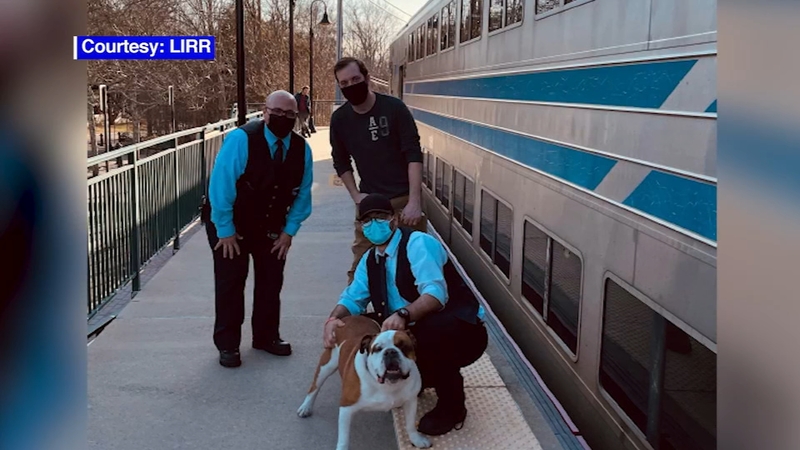 Lost bulldog gets ride of lifetime after wandering to train

LONG ISLAND (WABC) -- MTA employees received a big thank you after returning a lost dog to its owner in Suffolk County, after it wandered off to an LIRR train.

Sampson is a happy dog, who was adopted by Mike Frankow a year ago. They quickly become fast friends.

"He turned out to be a good dog.

Frankow says Sampson turned out to be a good dog, and says he even took his English Bulldog to work.

"I can walk him at lunch time, and he goes to the job sites," Frankow said.

But on Tuesday, during a work lunch break, Sampson decided to wander off. No big deal, Frankow thought.

But this time he did, as MTA employees on the eastbound LIRR saw something moving near the tracks at the Southampton station.

"He was on the embankment near the rails when I first saw him," MTA employee Christian Beck said.

Beck and others quickly brought Sampson on board.

"He was trying to hang out with us -- a very good personality dog," MTA employee Vinny Fragale said.

The train conductor Mike Stabile said they gave Sampson water and all the dog wanted to do was play.

Thanks to social media, they posted their find. The message and a call quickly got back to Frankow, who was still waiting for Sampson at his job site.

The train-hopping pooch was 40 miles away in Montauk. Sampson hitched a ride back home on the Bridgehampton westbound train and arrived promptly at 4:05 p.m.

Frankow -- understandably -- was all smiles and thankful.

"To save my dog like that -- that's incredible," he said.

It added a new meaning to a train ride and the kindness on board.

"Now when I see that train, I'm going to think of those guys," Frankow said.