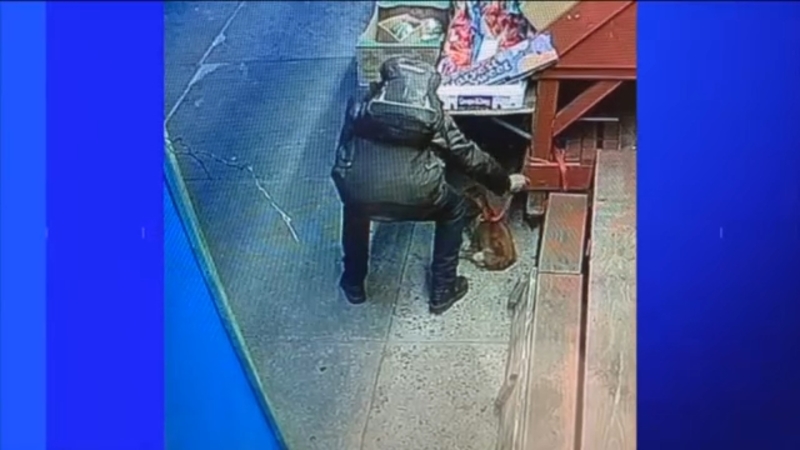 Reward offered after beloved dog swiped from outside NYC deli

UPPER WEST SIDE, Manhattan (WABC) -- A desperate family is offering a reward for their beloved dog after it was stolen from outside a Manhattan deli.

Luca, a 7-year-old red long-haired dachshund with black fringed ears, was taken from outside the Garden of Eden Market on Broadway between 107th and 108th streets on the Upper West Side around 4:45 p.m. on Sunday, December 27.

Victoria de Grazia says her boyfriend was only in the store for a couple of minutes, but that was long enough for the man to steal her dog.

The incident was caught on surveillance camera, but the family -- unsure if the man had criminal intent or was acting out of concern -- just wants the pooch back.
EMBED More News Videos

Luca, a 7-year-old red long-haired dachshund with black fringed ears, was taken from outside the Garden of Eden Market on the Upper West Side two days after Christmas.

The video shows the man bending down to pet the dog before untying its leash.

He continues petting Luca, then looks around, picks up the dog, and walks away.

"Look at that, what a bum," de Grazia said while watching the video. "He just picked him up and carried him away. Little Luca just looks around, and my heart drops."

The family is now offering $1,000 for information that leads to Luca's return.

Neighbors to are hopeful for Luca's return.

"You know, whether or not tying the dog outside is the right thing in front of a supermarket, I totally understand that as well," neighbor Evan Matzner said. "But either way, stealing the dog is not the answer, and everyone in the neighborhood is really upset about it."

De Grazia said she believes the man lives in the area and that he's been spotted walking the dog.
Anyone who recognizes the dognapper is asked to call police.