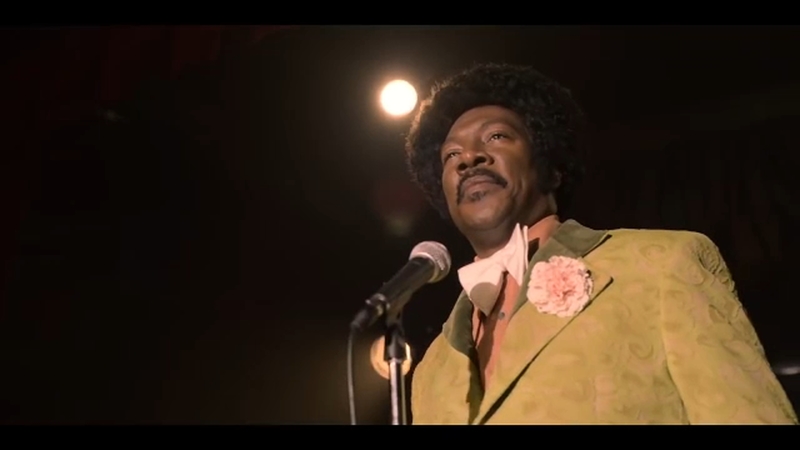 Movie Review: 'Dolemite is My Name'

NEW YORK (WABC) -- A new comedy in theaters is inspired by a real-life story from the 1970s and marks the return of one of the biggest stars of the 1980s.

"Dolemite Is My Name," says Eddie Murphy, and this movie puts him back in the game!

It's been more than a dozen years since his Oscar nomination for "Dreamgirls," and now, Murphy is back, his string of bad movies forgotten.

It's a return to the big screen that will enter the pantheon as one of the biggest comebacks in showbiz history.

Murphy honors the character created by the late Rudy Ray Moore, a comic so influential he's often called "The Godfather of Hip-Hop" thanks to his raunchy rhymes - with words and phrases we can't repeat here!

"Without him, Snoop Dogg would not exist," the rapper once said, so it's appropriate that Snoop shows up in this movie -- part of a terrific cast that includes Wesley Snipes as the director of "Dolemite."

Hollywood categorized these movies from the 1970s as "Blaxploitation pictures." Made cheaply, they drew big crowds of African-Americans at a time when the black audience was being ignored by Hollywood.

Incredibly, some of the most outlandish scenes, such ones involving an all-girl, kung fu army, are based on actual movies made by the real Rudy Ray Moore. He'd been a singer, a dancer, and a comedian before finding the role of a lifetime: the outlandish character he created called "Dolemite."

Moore, who died in 2008 at the age of 81, was so versatile he should not have been played by anybody else except Eddie Murphy, who uses every second of screen time to remind us why he became a superstar in the first place.

Old tracks from the 1970s and a new score to match help make this the most entertaining movie I have seen so far this year.

I was filled with wonder and wanted to yell at the top of my lungs, "WELCOME BACK, EDDIE MURPHY!"