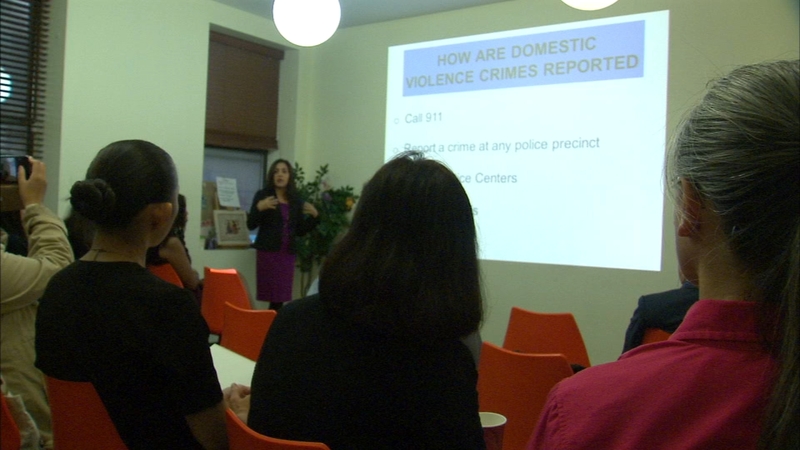 NEW YORK CITY (WABC) -- We hear about domestic violence on the news usually only when it ends tragically, but 12 million women and men in the U.S. suffer from physical violence by an intimate partner every year, many will do so in silence.

As part of Domestic Violence Awareness Month, the Manhattan District Attorney's office partnered with community groups and held workshops. One called "Overview of Domestic Violence" was held this week in Chinatown where incidents of rape or abuse are often not reported.

"Not speaking out is a very big problem for Asians. They don't want to lose face. They could be abused, but don't want to tell anyone anything is wrong" said Larry Lee, Executive Director of Womankind, which operates a hotline in 18 languages and walk-in community centers in Manhattan, Queens and Brooklyn.

The non-profit offers counseling and housing services to survivors of Domestic Violence Human Trafficking and Sexual Violence. Often fearful of an abuser finding them, victims can find refuge at confidential residences.

"More often than not survivors of violence need a place to flee and we offer that space for them we have 2 residences house where we provide services for up to 20 individuals it could be families to figure out what recovery looks like" said Alena Victor, Director of Resident Services at Womankind.

Service providers are often the front lines of defense against domestic violence, according to the Manhattan DA.

"Victims have to be made aware they can report abuse safely," Cy Vance told the small crowd gathered in the Womankind Chinatown office. Some wore headphones to hear translators in both Cantonese and Mandarin.

The NYPD gets an average of 671 Domestic Violence Calls a day. Last year in the five boroughs alone, 280,236 domestic violence incident reports were prepared.
"Domestic violence doesn't differentiate where you come from, what your income. We all have a responsibility to provide support directly into the communities," Vance said.

The DA's office explained it is important to document the following if you are being abused or know someone who is a victim:


Domestic violence is an under reported crime. 12 million incidents are reported to police, but a fraction - less than one person - of survivors seek help.

The DA's Office urges victims of domestic violence to seek help by visiting one of our city's Family Justice Centers or calling our Domestic Violence Hotline at 212-335-4308.