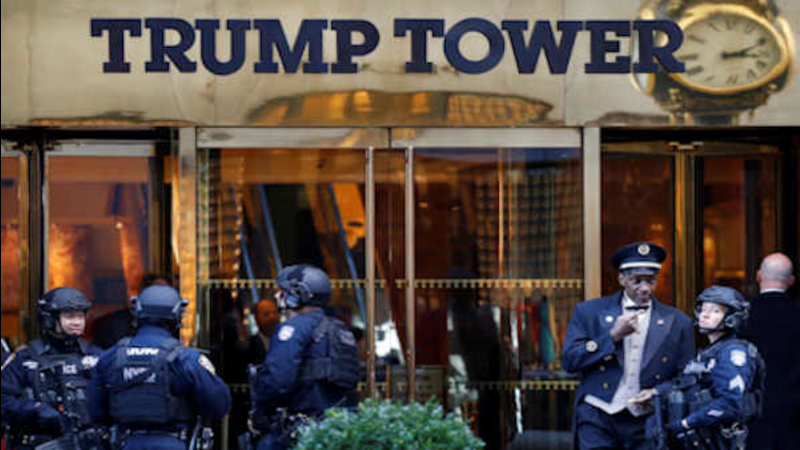 MIDTOWN, Manhattan -- Congress is shortchanging the city by proposing to reimburse just $7 million - a fifth of the city's request - for protecting Republican President-elect Donald Trump, the mayor said Wednesday.

"New York City taxpayers should not be on the hook for 80 percent of the national bill" to protect Trump and his family, Democratic Mayor Bill de Blasio said in a statement.

Since Trump won the Nov. 8 election, security around Trump Tower, the eponymous Manhattan skyscraper where he lives and works, has been stepped up to extraordinary levels. The New York Police Department has played a major role, along with the Secret Service and Trump's private security personnel.

The Fifth Avenue tower is safeguarded by police officers armed with assault weapons, bomb-sniffing dogs and concrete barriers. Police have closed some traffic lanes, barricaded the block where Trump Tower residents have a private entrance and set up checkpoints manned by officers in guard booths.

De Blasio and other Democratic officials wanted up to $35 million in federal reimbursement for police overtime and other costs of safeguarding Trump from Election Day to his Jan. 20 inauguration. But stopgap spending legislation unveiled Tuesday in the Republican-led Congress includes $7 million.

The legislation would keep the government running through April. The House is expected to vote as soon as Thursday, and the Senate soon after.

The federal government has reimbursed state and local governments before for protecting incoming presidents, setting aside $7 million in a grant program after Democrat Barack Obama, who previously represented Illinois in the U.S. Senate, took office in 2009. Chicago spent more than $1.5 million securing Obama's home there between his election and his inauguration, according to a 2009 Chicago Tribune report based on city records.

New York didn't detail its projected costs in letters to congressional leaders and the White House earlier this week but noted the "unprecedented" challenge of providing presidential-level security at a building that's a tourist attraction in one of the busiest parts of Manhattan, plus protecting Trump's motorcade when he heads out.

"Republicans in Congress have abdicated this basic responsibility" of protecting the president-elect, Rep. Nydia Velazquez said.