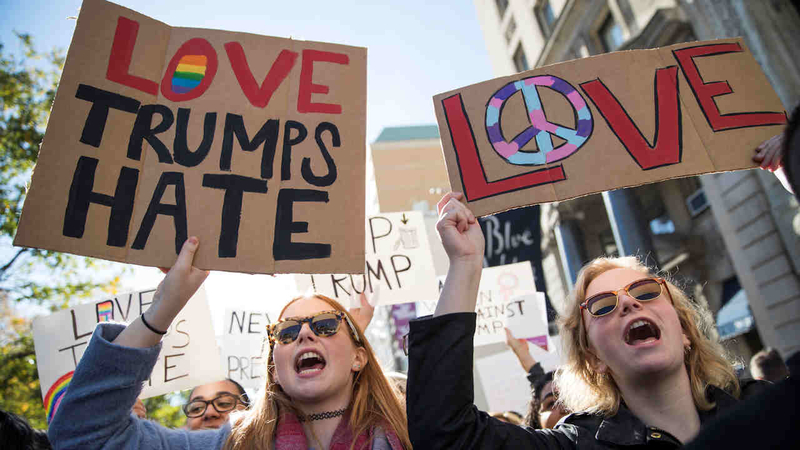 NEW YORK (WABC) -- Demonstrations were underway Saturday in New York as protesters took to the streets of New York City for a fourth-straight day, outraged over this week's presidential election.

Thousands of #DonaldTrump protestors marching down 5th Ave shouting "this is what democracy looks like" #ABC7NY pic.twitter.com/g85gsNBLQR

About 2,000 protesters marched along Fifth Avenue in Manhattan shouting "not my president" and other slogans.

A.J. Ross was with protesters in Midtown.

The protesters rallied at New York's Union Square on Saturday before picking up steam and taking their cause into the street and toward Trump Tower. Fifth Avenue was crowded with protesters for blocks. Police lined both sides, following along on foot and on motorcycle, but the group remained peaceful.

The arrests, according to the New York City Police Department, were around 7 p.m. mainly near Sixth Avenue between 46th to 50th streets. An estimated 4,000 demonstrators gathered in Washington Square Park, many of them are women. It was part protest, part support group.
They were determined to send a message to America's next president and the people who elected him. "I think that we have to do everything we can to fight the bigotry and hatred that he's incited with his campaign and if he stands for bigotry than I can't stand for him," said Naomi Friedman, a Tenafly resident.

Protesters converged on Union Square and then marched through Midtown Friday evening. Some headed up Fifth Avenue and others went up Sixth Avenue. When a handful of demonstrators tried to stop traffic, they were warned by police, and then arrested.