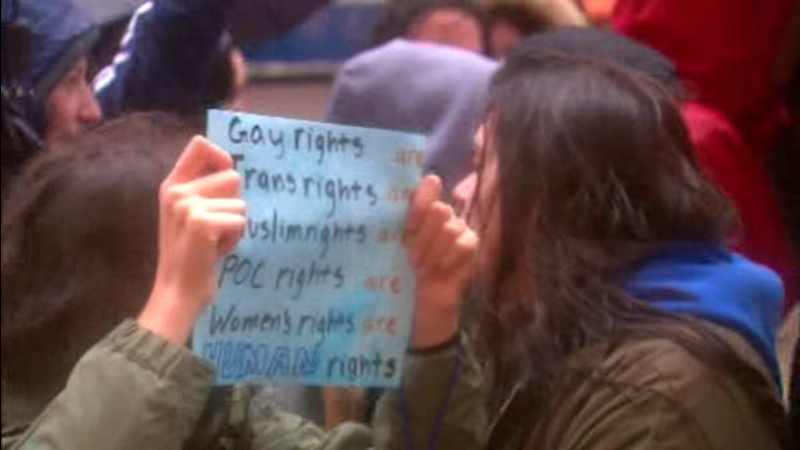 MIDTOWN, Manhattan (WABC) -- Hundreds of New York City students walked outside of class Tuesday and briefly rallied outside Trump Tower in Midtown, carrying their signs and their chanting voices into the streets nearly a week after Donald Trump's election.

Pounding wind and rain probably had something to do with the brevity of the well-publicized city-wide protest, which began around 10 a.m. and was over by noon. Most of the students were in high school and middle school, and are all united in their dislike of President-elect Trump. They were orderly and stayed in special areas set up by the NYPD.

Metal barricades kept them from disrupting traffic at Fifth Avenue between 58th and 55th streets, with the crowd easily reaching the 1,000 mark.

Many said while they may not be old enough to vote, they still play an important role in democracy.

"We have something to say," another protester said. "We want to show that Donald Trump should not have been elected. White nationalism should not be in place. White supremacy will not define America."

Many declared concerns over Trump's comments about minorities and the effect he will have on their communities.

"I am out here, as well, to support women's rights and racial equality and pretty much everything he stands against," another demonstrator said.

Some of Trump's supporters have called for the demonstrations to stop, including former New York City Mayor Rudy Giuliani, who dismissed the protesters as "spoiled crybabies."

Trump has accused some of being "professional protesters," although he said in a "60 Minutes" interview broadcast Sunday that he also believes some are afraid for the country's future "because they don't know me."

The Department of Education issued the following statement on discipline for those who left school:

We encourage schools to facilitate opportunities for students to share their opinions in thoughtful and respectful ways, and provided guidance on ways educators can support students to have meaningful conversations and express themselves during the school day. Providing a safe, supportive and inclusive learning environment for students is our top priority, and we will continue supporting students and discussing positive ways to redirect any uncertainty or frustration that they may be experiencing.

The resources provided to schools include:
- Tips for helping children cope with stressful events that can also be shared with parents and caregivers
- Post-election teaching resources and information about educator trainings on how to recognize symptoms of psychological distress in students and motivate them to seek help
- Additional mental health supports for those in need