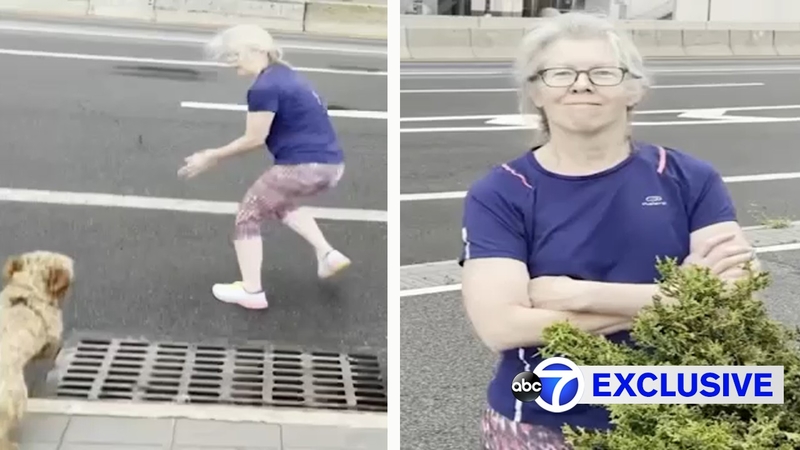 LOWER MANHATTAN (WABC) -- A victim is speaking out exclusively to Eyewitness News after he was the target of an attack by a woman who has been dubbed "Downtown Karen" for her harassing behavior.

The woman has been known to target victims, specifically Asians, near South Street Seaport for awhile.

Two recent incidents were caught on camera where the woman can be heard spewing racial hate and attempting to lure the victim's dog into oncoming traffic.

Clapping her hands and running onto the FDR didn't work once, but the 58-year-old woman got the victim's cockapoo Boba to run to her the second time.

Andy Keung says he stopped by the heliport to adjust his puppy's collar on July 3 around 9:30 a.m. when he was accosted by the woman.

A bystander got involved when she heard that comment and asked why she was harassing the man walking his dog.

She then made a comment about the dog not being on a leash.

"You put it out there that you can insult someone who is of Asian descent and then instigate the dogs to run in the middle of the street because of your own principle -- or whatever reason," the bystander said. "Who are you? Leave these people alone."

The NYPD is investigating a second complaint from another downtown dog owner who shared a video of her encounter with the same woman from the morning of July 7.

In that video, the woman also yelled at the victim about the dog on the grass.

"No dogs on the grass," the woman said in the video. "Your dog is not on a leash and, oh, you can't read English apparently."

The victim told police the woman spit on her and that's when a witness intervened.

The Hate Crimes Task Force is looking into both incidents as a potential hate crime.

"Justice is just getting the word out about 'Downtown Karen' and just notifying the community that she's harassing people," Keung said.

Eyewitness News called, texted and left messages with the suspect who neighbors say is an anesthesiologist. There was no comment from her on her side of the story.