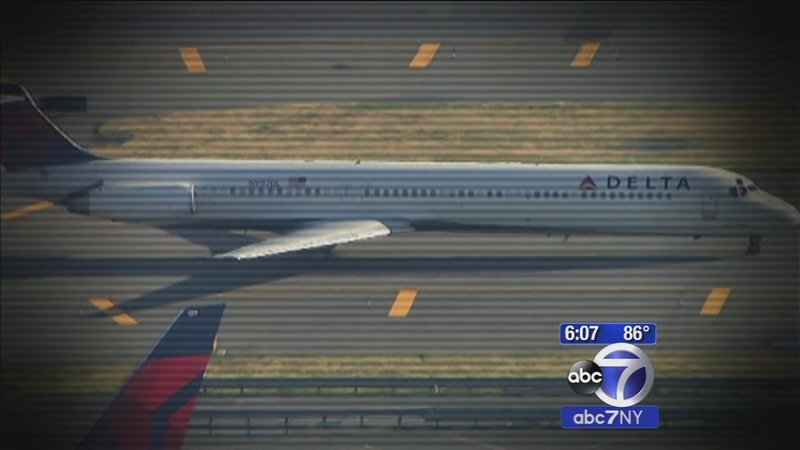 A Delta airplane preparing to land at JFK Friday had a close call with a drone.

A spokesman for Delta Airlines told Eyewitness News that flight 407 was heading from Orlando, Florida, to New York's JFK International Airport. The crew reported the an airborne object was near the plane as it made its approach to the runway.

The plane landed at about 5 p.m. without incident.

"We are investigating and cooperating fully with the Federal Aviation Administration," said the spokesman.

The FAA said the unmanned aircraft was seen off the right wing of the plane at 1,700 feet. The pilot did not take any evasive action.

Sources told ABC News the drone was about 100 feet from the plane.

Tower: Delta 407
Cockpit: Yeah About a mile back there was a drone flying just on the SW side of this (INAUDIBLE) airport here.
Tower: At what altitude would you saw that way?
Cockpit: I'd say about 100 feet below us. Just off right wing.
Tower: Roger

(about 30 minutes later)
Tower: Any chance you get the color or type?
Cockpit: No its not close enough to be able to tell.
Tower: Jetblue..use caution..the one that's ahead of your reported a drone at Floyd Bennett Field. (SW of JFK)


The plane was an MD-88 with five crew members and 154 passengers on board.

Just a hundred feet below what had been a routine flight, with many passengers heading home from Disney vacations in Orlando and who probably had no idea how wild their ride could have become.

Air traffic controllers peppered their pilots with questions, and warned others of the potential for danger.

Tower: American 164 use caution previous arrival reported a drone in the vicinity of the Floyd Bennett Canarsie area.
Cockpit: Okay, American 164 thanks.

As unmanned recreational drones have become more popular, close calls with professional pilots have been taking off. The FAA reports 25 incidents every month.

And in the nation's most congested airspace, aviation experts say there's already so little room for error in the crowded skies over New York.

"The reason we don't want a drone anywhere close to commercial airliners is because of the possibility of one being ingested into an engine and doing a tremendous among of damage," said aviation analyst John Nance.

Fortunately that didn't happen Friday. Delta Flight 407 and others behind it all landed safely, as controllers called in a police helicopter to find the drone and its owner.