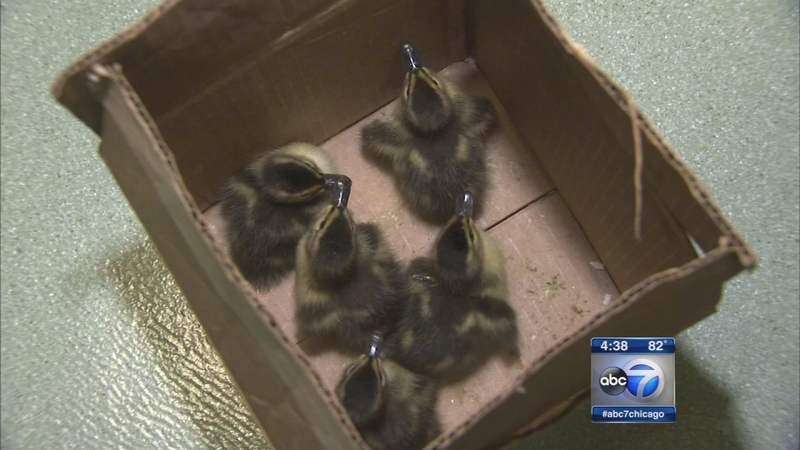 Chopper 7 HD spotted the group scurrying along the right shoulder of the Armitage Avenue on-ramp around 8:40 a.m. Thursday, dodging cars and trying to get to the other side. The mother was nowhere to be found.

A man in a light-colored SUV stopped, snapped a photo and guided them to the grass just past the left shoulder. He then got back into his car and drove onto the expressway.

But the baby ducks waddled back onto the roadway, trying to cross back to where they came from. A few cars maneuvered around the tiny animals, but one SUV didn't see them and nearly ran them over. But thank fully they did make it to the right shoulder.

Lucky for the ducklings, Cory Wurst and Steve Bennett were in the right place at the right time. The pair - service technicians for an Elgin pumping contractor - were on their way to a job downtown and were in the inbound Kennedy near North Avenue.

"We're on the Kennedy Expressway and we see a car stopped in the middle of I-90 and wonder what's going on," says Bennett.

When they realized what had happened, they went into rescue mode.

"A lot of people went around, but pretty much all we did was pull over, put our flashers on and blocked traffic while he got out," Wurst says.

One of the men scooped the ducklings into a cardboard box got out of a white pickup parked on the right side of the Kennedy. Bennett thought he would be able to release them to safety nearby, but he was wrong.

"I let them go on the off ramp at North Avenue and 90 and they started walking right back up the ramp. So I couldn't just leave them there. I don't think they would have made it," Bennett says.

The men gathered the five ducklings back into the box and headed to Lincoln Park Zoo for help, but were told the facility couldn't take ducklings in distress. Undeterred, the men then drove to the Anti-Cruelty Society.

"This is very unusual. Most of our intakes are cats and dogs, so we're excited to have some ducklings," says Colette Bradley, Anti-Cruelty Society.

The Anti-Cruelty Society will make sure the ducklings are turned over to a wildlife rescue, which will find them a permanent home and try to locate their mother.