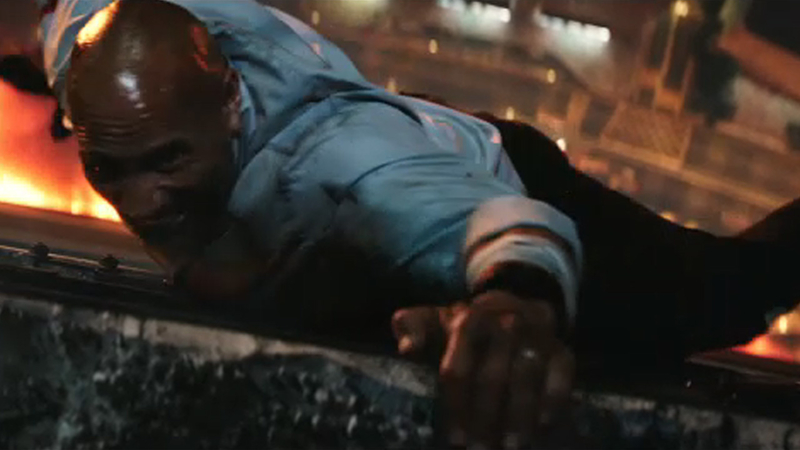 NEW YORK (WABC) -- Summer can be a silly season at the box office, and Dwayne Johnson's "Skyscraper" is in keeping with that tradition.

The picture marks the return of The Rock to the big screen after just a few weeks and Neve Campbell after a few years. So how'd that go for them?

As the man himself says at one point, "This is stupid."

Yes...it is. It is so foolish, in fact, that Johnson spends most of his time in and around this "Skyscraper" defying the laws of physics. So un-tethered to any kind of reality is this movie, it ends up being just as silly as "The Towering Inferno" was in 1974. Except now, the special effects are much better.

Johnson plays a former FBI agent left an amputee by an explosion and hired a decade later as a security consultant by a guy who has built a new jewel of the orient. "The Pearl" is the most advanced, super tall structure in the world, and Johnson's character is in charge of certifying the building is safe -- which, of course, it isn't. And unfortunately for him, he finds this out only after he has moved in his wife, played by Campbell, along with their adorable kids.

When bad guys start a fire in the tower, he tells the authorities, "My family is trapped 240 floors in the air."

"So, what's the plan?" the Hong Kong cop inquires.

And in the spirit of his previous character, The Rock replies, "Whatever it takes."

"Whatever" turns out to be quite extreme, and mom turns out to be pretty handy when it comes to fighting bad guys. But it's much less clear why The Pearl has to be set on fire in the first place, just so the villain can get a hard drive from the developer.

Campbell's character tells her husband at one point, "This is crazy." And so we began with stupid and end with crazy, and you definitely don't want to go if you're afraid of heights.

"Skyscraper" is what I like to call a "howler," a special kind of drama that is so crazy you just can't stop laughing. To qualify, the action and the dialogue have to be equally silly, and the picture can't be too long. This one ticks all the boxes, so I had fun.