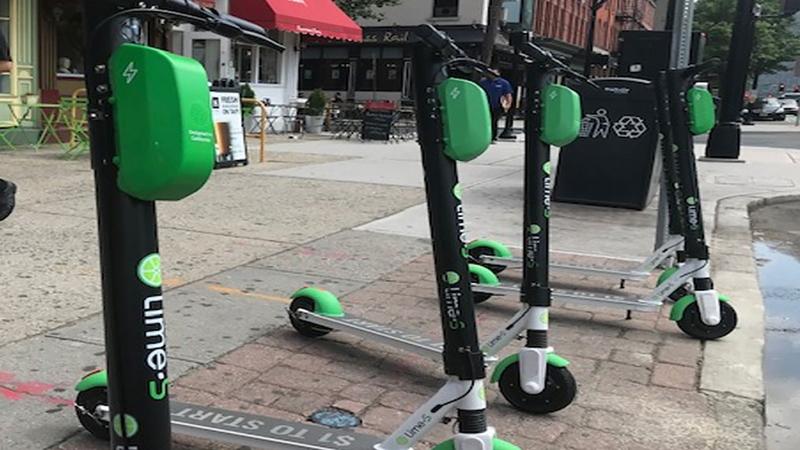 HOBOKEN, New Jersey (WABC) -- A 26-year-old man was arrested for allegedly driving an electric scooter while intoxicated in Hoboken, the second time such an arrest has been made in the city as the devices grow in popularity, according to police.

"August 14 was the first one, where just a highly intoxicated individual fell off a scooter, injuring himself in a residential neighborhood," Hoboken police Chief Kenneth Ferrante said. "And now we have this one on Sunday."

Authorities say Sergeant Nicholas Burke was in the area of Newark Street and Park Avenue just after 4 p.m. when he observed a male who was visibly staggering and unsteady unlocking the Lime-brand scooter.

The man began to ride away, and Burke followed with his lights and siren on, advising the rider to stop.

Police say the man was swaying back and forth on the scooter and appeared as if he was going to lose control at any moment.

He stopped the scooter about a block later, and other responding officers conducted a sobriety test.

The man, identified as Nicholas Cutrone, reportedly failed and was placed under arrest.

"Based on the odor coming from him, slurred speech, inability to stand, that he was highly intoxicated," Ferrante said.

He was charged with DWI, reckless driving and refusal to submit to a breath test.

"Lime has a zero tolerance policy for drunk riding," the company said in a statement. "We are in the process of removing this rider from our platform, and have previously banned those who have engaged in dangerous and unsafe riding behavior."

Ferrante cautioned people about use of the e-scooters under certain adverse circumstances.

"I see people who still utilize them in bad weather, and I get concerned how people think that's a safe way to be operating," he said.