Family from Westchester in Indonesia when massive earthquake struck 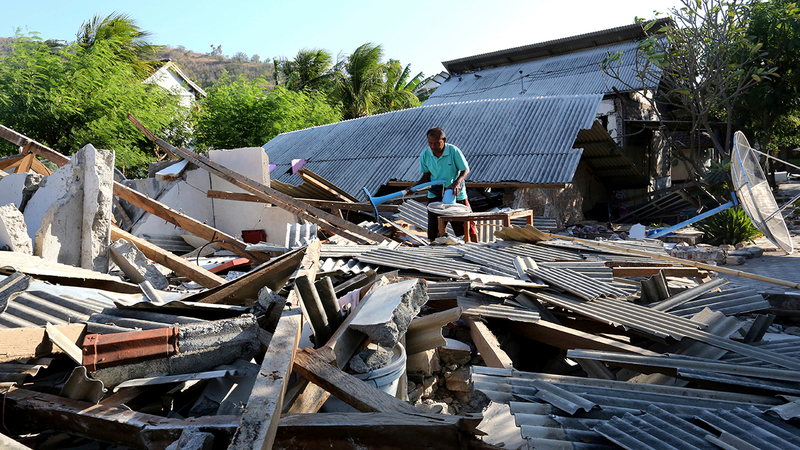 SENGGIGI, Indonesia (WABC) -- There is a desperate search for survivors of a deadly earthquake in Indonesia. At least 98 people have been killed, with many more missing.

A flood of volunteers are trying to help, including a woman from Westchester County.

In the island paradise, people jammed the beaches to escape the horrors brought on by the weekend's massive quake.

It measured 7.0 magnitude on the northern coast of Lombok in the Indonesian islands.

Tens of thousands were left homeless when the ground shook for the second time in two weeks. And in the midst of it all is a family from Westchester.

"Very quickly I shouted to the kids to run outside," Rye resident Boukje van den Bosch-Smits.

She and her four kids traveled there from Rye for vacation, and tacked on a week to volunteer at an orphanage with 80 kids.

But on their first day of the trip, the earthquake destroyed almost the whole place, and their mission took on a critical turn amid aftershocks that won't stop.

"This wasn't how we planned to volunteer but we're here and happy to do our part," said Bosch-Smits.

"We should appreciate that where we live is safe and sound on the East Coast," said Bosch-Smits. "And if people could please donate, a lot of money will be needed to rebuild all this and make the children here feel safe again cause they have nowhere else to go."

Some areas still hadn't been reached 24 hours after the quake because of collapsed bridges, blocked and ruptured roads and the loss of power and communications.

More than 230 people were seriously injured. Thousands of homes and buildings were damaged and those displaced camped wherever they could - in sports fields and on roadsides, cobbling together ramshackle shelters and building campfires for warmth.

Videos showed screaming people running in panic from a shopping mall and a neighborhood in Bali where parked vehicles swayed. On Lombok, soldiers and other rescuers carried the injured on stretchers and carpets. Many were treated outdoors because hospitals were damaged.

The quake triggered a tsunami warning, and frightened people rushed from their homes to higher ground, particularly in North Lombok and Mataram, the capital of West Nusa Tenggara province. The warning was lifted after only small waves were recorded.

For information on how you can help, visit www.pedulianak.org.