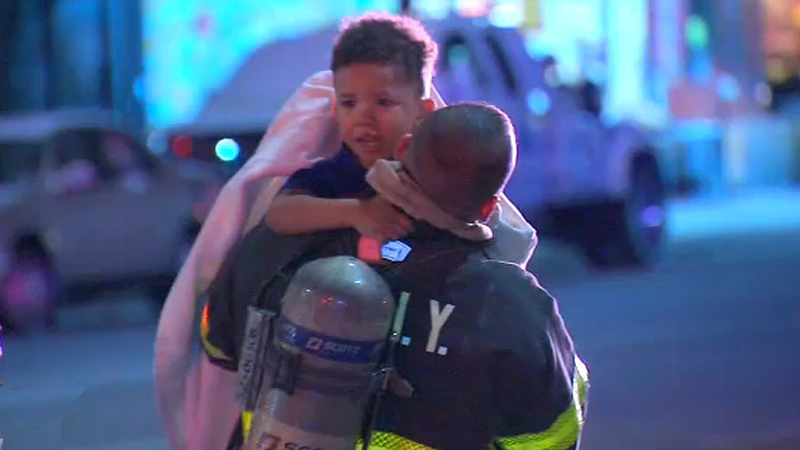 EAST HARLEM, Manhattan (WABC) -- Nine people, including four children and two firefighters, were injured in a fire in a six-story apartment building in Manhattan early Friday.

Firefighters rescued several people from the blaze, which broke out around 3:30 a.m. on the sixth floor of the building on East 112th Street and Third Avenue in East Harlem.

Smoke was pouring out some of the windows as firefighters raced inside, leading several people to safety, including a child seen wrapped in a blanket.

"I grabbed one of the child(ren), and I told them I was going to take them out," firefighter Osmar Martinez said.

Martinez, firefighter Justin Pelka and probationary firefighter Amir Francis are being hailed as heroes for rushing in to save lives.

"You're limited to your senses," Francis said. "It's completely blacked out. All you can do is feel on the walls and listen to what's going on."

Seven victims were described as being from the same family, plus the two firefighters. A man, believed to be the family father, was rushed to Harlem Hospital in critical condition.

The other residents were treated for smoke inhalation and various minor injuries.

There were no working smoke detectors in the home. They were present, authorities say, but not operational.

"Not having operational smoke detectors, it's the makings of a disaster," FDNY Battalion Chief Anthony Saccavino said. "But in this instance, we have a wonderful early Christmas gift."

Officials believe the fire started in an overloaded surge protector that had both a space heater and Christmas lights plugged into it. Space heaters are meant to be plugged directly into the wall.