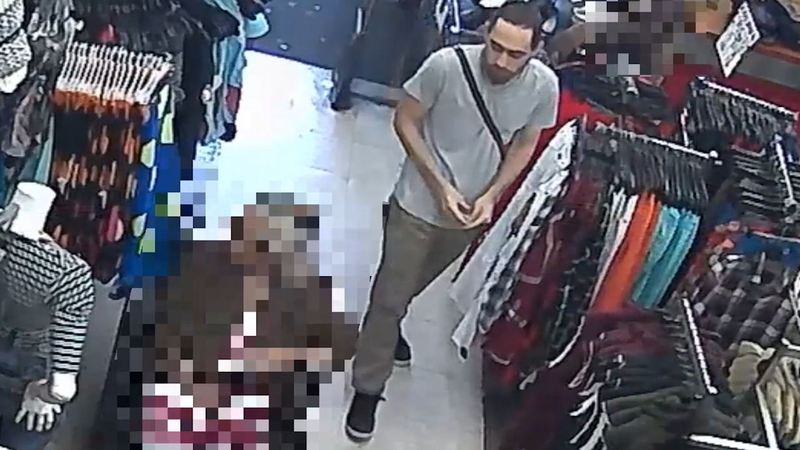 EAST HARLEM, Manhattan (WABC) -- The suspect preyed on a helpless 93-year-old woman in wheelchair to get some quick cash inside this store, and now police are hoping the release of this surveillance video will help generate tips that will put this cold-blooded thief behind bars before he strikes again.

"He hurt me, he hurt me right there and in the arm right there. Because I tried to grab him, but he pushed my arm away and that's where I got hurt," said Maria Vasquez, robbery victim.

Vasquez never saw it coming and had only mere seconds to react and utter a scream, when the $600 she had just taken out the bank and tucked away inside her dress was suddenly snatched by a stranger.

"Right away he puts his hands on me, because he knew where the money was. I said, run, run, run there taking my money," Vasquez said.

At first you could see him browsing the racks, then scoping out Maria, creeping up from behind her wheelchair to swipe the envelop full of cash from her bra.

"I feel terrible, and just keep thinking about it," Vasquez said.

As Maria called out for help, the suspect quickly slipped back out the front door and down E. 116th Street.

She says she planned to use the money to pay for her monthly bills and now worries about how she'll get by.

"I need that money, because my husband passed away seven years ago. Until the money comes next month, I'm not sure how I'm going to pay the bills," Vasquez said.

Meanwhile, police are asking anyone who make recognize this heartless thief to speak out before he targets someone else.

"I want him to turns himself in, I don't want them to kill him, but punish him so we can all see what punishment is for the rest of the people that think about robbing others," Vasquez said.

Police say the suspect is about 5'10" tall and weighs around 160 lbs., He was last seen wearing a gray shirt, black sneakers, tan jeans and a tan bag.