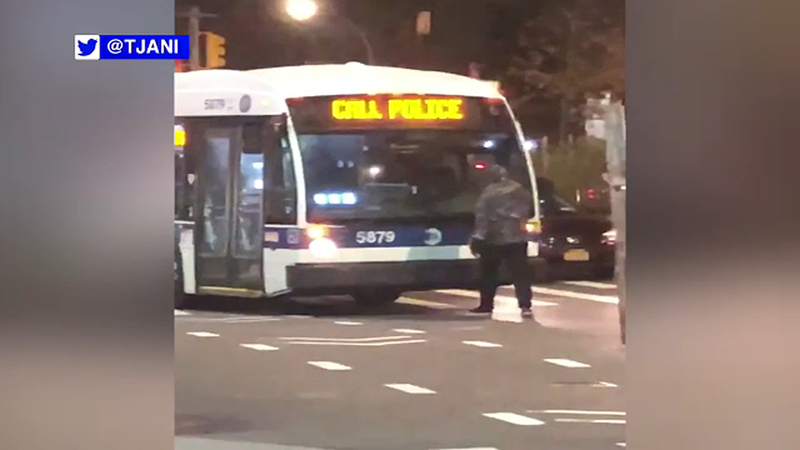 EAST VILLAGE, Manhattan (WABC) -- Authorities are searching for a man who was caught on camera causing damage to an MTA bus while yelling in fury on a Manhattan street.

The apparent would-be passenger was standing in the middle of Houston Street, blocking the bus's path.

"Run me over! Just like you ran past every bus stop when I banged on your (expletive) door! You piece of (expletive)", he shouted.

He then cracked both rear view mirrors, ripped off both windshield wipers, and smashed several doors.

The witness who shot the video says from the beginning he could tell things were about to erupt.

"I chased you 23 (expletive) blocks and you wouldn't stop, (expletive) you, you piece of (expletive)," the man was heard saying.

"All of a sudden he starts kicking in the front door like bong bong! I'm like OK, I have to document this turn of events because this is crazy," the witness said.

Passengers on the bus, though, were a little less cool about the whole thing.

"They were visibly alarmed for sure," said the witness.

Police say the man took off before they got there.

That bus has cameras and the MTA says it is taking this very seriously and fully cooperating with police to find him.