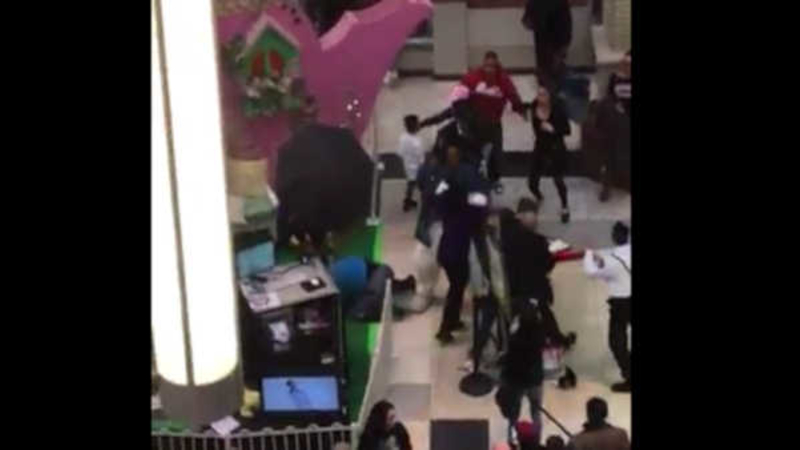 Mother speaks out about Easter Bunny brawl at mall

JERSEY CITY, New Jersey (WABC) -- A brawl caught on camera at a mall in New Jersey involved a costumed character you probably wouldn't expect -- the Easter Bunny -- and now, charges have been filed.

It all happened as customers were waiting to get their picture taken with the Easter icon at the Newport Centre Mall in Jersey City around 5 p.m. Sunday, and the brawl that ensued was caught on camera.

The man who was dressed as the bunny is at the center of the melee and can be seen throwing punches outside the seasonal display.

Mall security jumped in to get the bunny brawl under control.

According to Jersey City police, the 22-year-old man who was playing the role of the Easter Bunny, identified as Kassim Charles, said the father of a 1-year-old child verbally and then physically attacked him after the girl slipped from the chair following her photo.

Morianda says she, her husband, and her 14-month-old daughter, Jaelynn went to the Newport Center Mall Sunday hoping to get a picture of Jaelynn with the Easter Bunny. It's a trip that ended with disaster.

Natalie says the person in the bunny costume dropped Jaelynn face first on the floor.

"He dropped my daughter, and my daughter's father, you know, he just moved his hand and the guy just punched him seven times in the face with my daughter on him, until he finally got unconscious, not unconscious but you know he kind of got dizzy," Morianda said.

"I look over and literally, I see a man in the bunny suit and the top half of it was off, so the mask was off, everything else was on, I'm assuming it was a parent, I really don't know who it was," said Shannon Deluco, a witness.

It was a parent, Natalie's husband Juan Jimenez, whose finger was bitten so hard in the scuffle he needed 14 stitches, and both he and the man in the costume were arrested.

No one answered at the home of 22-year-old Kasim Charles who was in the bunny costume.

Both men remain in jail charged with assault.

"He was defending his daughter, not even me because I'm a grown person, but he was defending our innocent baby, she fell face first, and you know, it's not fine that he could be in jail and my daughter could lose her father for the next five to 10 years of her life," Morianda said.

The display is not run by the mall, but rather is contracted through the Noerr Programs, which issued the following statement: