Inside look at how healthcare workers protect themselves from Ebola 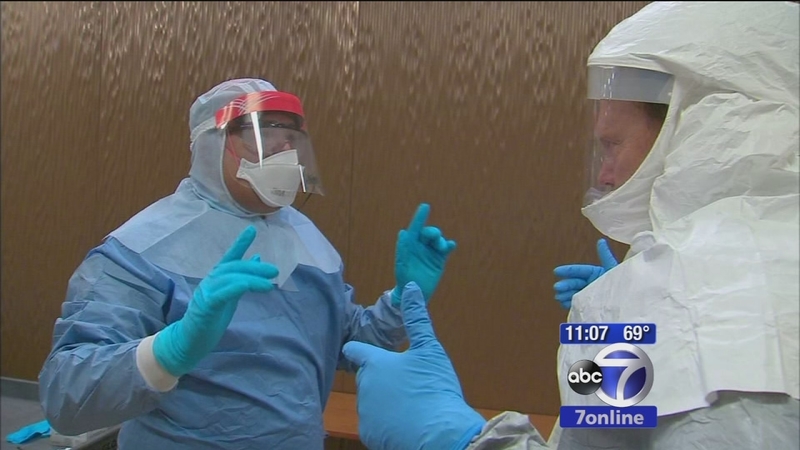 NEW YORK (WABC) -- Local hospitals are scrambling to be prepared for anyone who might have Ebola.

Bellevue and Mount Sinai say they're ready for patients. Other hospitals say they have plans in place.

But it's easy to make mistakes as Eyewitness News Reporter Jim Dolan discovered.

He put on a protective suit and then did his best to get out of it without coming into contact with any contamination.

"Make sure they go up as far as possible because that becomes a barrier," said Eddie Reyes, an Isolation and Hazardous Materials Expert at North Shore LIJ.

The suit covers the feet, but in this line of work, with lives on the line, one layer is never enough.

"These are an extra layer, so that for whatever reason, if the boot gets a cut or starts to split, there's an opening, this becomes a primary layer," Reyes said.

A special tape is used to cover the open area between the boot and the suit; again, any potential opening can result in contamination.

Then, a second pair of gloves, now and once again, tape to cover the area where the suit and gloves overlap.

As bulky as the suit is, the person wearing it still has to work in it, to draw blood or conduct tests.

The final step is connecting this battery powered filter, which cleans the air so the worker doesn't breath in any contaminant.

After all of that, he or she is ready to go in and work safely with an Ebola patient.

But the most dangerous part is still ahead. Because after contact with the patient, the suit may have body fluids on it, so it's dangerous. It takes two people to take it off.

"You are going to try not to touch his arms, keep your hands where you can see them, and don't make any contact with me," Reyes said. "Don't touch the outside of the glove now; I'm going to have you turn towards the cameraman"

"I know how to do that," Dolan joked.

"I didn't do that very well," Dolan said.