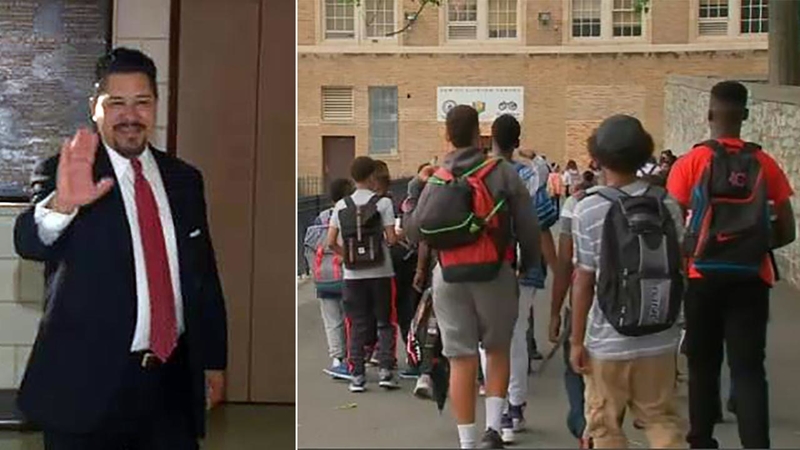 Back-to-school excitement has been building in the nation's largest school system, and it's not just the students who have been counting down. It's also a big day for the city's brand new schools chancellor, who opened school doors at MS 137 in Ozone Park, Queens, at 6 a.m. and plans to visit schools in every borough on Wednesday.

Richard Carranza has been on the job for just four months, and he's clearly on a mission.

In an interview with Eyewitness News, Carranza outlined a series of ambitious goals for the coming year.

N.J. Burkett sat down with NYC Schools Chancellor Richard Carranza ahead of the first day of school.

Meanwhile, Carranza was joined by Mayor Bill de Blasio at the first-ever day of 3-K for All in Queens, at PS 377 in Ozone Park. This school year, free, full-day 3-K is expanding to serve 5,000 students at 187 sites in six districts across four boroughs (Queens, Manhattan, the Bronx, and Brooklyn) -- up from 1,500 students last year at 47 sites in District 7 in the Bronx and District 23 in Brooklyn.

"For too long, New York City was divided," de Blasio said. "Some people could afford an early start and others couldn't. That's why we made early childhood education a priority from day one and why we've worked to expand our programs to reach every child regardless of zip code or income level."

3-K for All is expanding ahead of schedule, and officials say the Equity and Excellence for All initiatives are now reaching every New York City public district elementary, middle, and high school. This is also the first school year Carranza's streamlined leadership and support structure, which officials say will align supports, bring resources closer to schools, and create a clear line of accountability from each classroom to the chancellor.

"Welcome back to our 1.1 million students and their families, and our 145,000 educators and school staff, from Wakefield to Tottenville and Rosedale to Washington Heights," Carranza said. "I couldn't be more excited to spend my first full school year in New York City with such talented and passionate students and adults, and I'm looking forward to an incredible year."