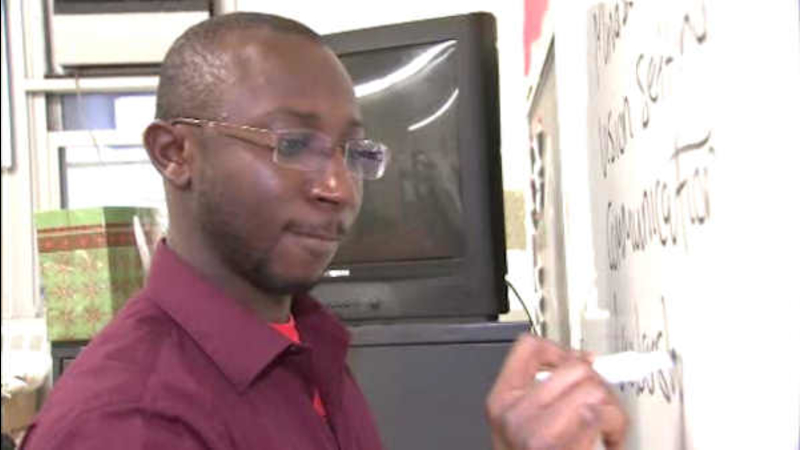 BRONX (WABC) -- A teacher from the Bronx is in rare company, among just dozens of fellow educators from around the world in the running for a million dollar prize.

It's meant for teachers who go above and beyond, like tripling his students' standardized test scores, just the start of his accomplishments.

"When I picked up the paper this morning opened it and saw the headline it felt so real," said Alhassan Susso, a government and economics teacher at the International Community High School.

He has been named a top 50 finalist for what is often regarded as the Nobel Peace Prize for teachers.

"Four years ago I started my teaching journey, four years later to be considered one of the top 50 outstanding educators in the world, it's something it's beyond words to describe how I feel about that," he said.

It's a $1 million teaching award from the Varkey Foundation Global Teacher Prize. And it's an opportunity for Susso to expand a program that has been showing stellar results in his immigrant students.

"The idea behind the program is to empower kids to be able to have a sense of direction for where they are going, so when they leave high school, whether they go to college or not they are able to succeed in life," he said.

The students come to school an hour early every day to be a part of the program. They are the ones who nominated him, one student writing "The program helped me to become more confident with myself, both physically and internally... Mr. Alhassan taught me to love myself and how to positively manage external disapproval."

And this one: "He has helped me not only academically, but to find my life's purpose...He has also helped me improve my relationship with people as well as many other different aspects of my life."

Susso is a living breathing example of what he's trying to teach - having overcome major obstacles as a child in West Africa, raised by his grandmother, then coming to America at the age of 16 in 2000.

"I went to Poughkeepsie High School," he said. "The challenge I was the only African student, fitting in was a huge obstacle."

The 50 teachers chosen will be whittled down to 10 finalists and then the winner will be announced in March.

"Win or lose, I'll never forget what my grandmother told me, Whatever you end up doing in life, give it your all and don't expect anything in return," said Susso.