Dozens of parents descend on Albany in fight for school funding 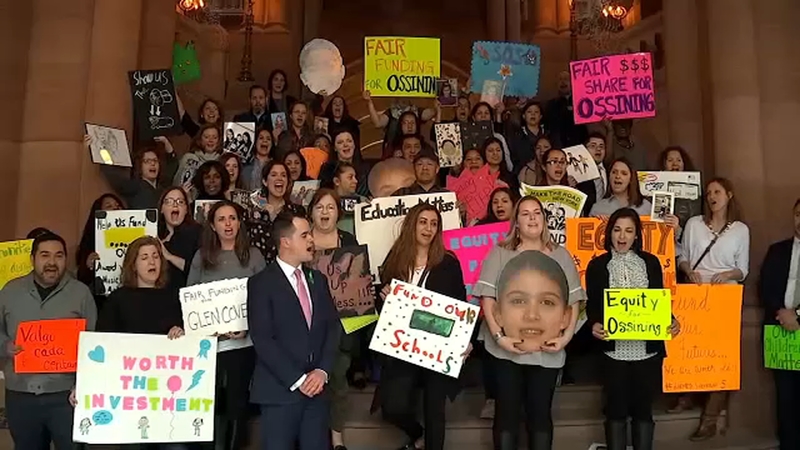 Dozens of parents descend on Albany in fight for school funding

ALBANY, New York (WABC) -- Dozens of parents from districts known as the Harmed Suburban Five rallied in Albany on Thursday to fight for fair funding for education ahead of the April 1 deadline for the next fiscal year's budget.

They all took time off work and arranged for child care in order to make the more than two-hour trip to Albany. Standing in the New York State Capitol building holding pictures of their children, they shouted, "What do we want? Funding! Fight, fight, fight education is our right!"

Lawmakers empathetic to their cause also wore green ribbons around the Capitol in support of increased funding for Foundation Aid, the formula the state uses to determine need and target its spending on the neediest districts.

These lawmakers also marched through the Capitol chanting in support of education.

"I think actions like the ones today will be a constant reminder for the governor he can't play himself this budget season," said Assembly Member Diana Richardson, D-Brooklyn. "Until you fill in the gap, you can not speak to equity or champion anything."

The rallies follow weeks of coverage by Eyewitness News exposing the conditions created by years of under-funding for certain districts around the state.

Faced with overcrowding, these schools have put students in basements with ladders for fire escapes and used converted closets and breezeways as classroom space.
Thursday, parents representing the Port Chester, Ossining, Glen Cove, Westbury and Riverhead school districts delivered letters adorned with student artwork to the governor's office asking him to put more money toward education.

Gov. Andrew Cuomo has proposed a fraction of the education spending on Foundation Aid that lawmakers have in the next fiscal year, and parents in the Harmed Five worry about what will become of their schools, all of which are facing budget deficits.

"My children have already lost," said Alexis DiMaggio, a mom in the Glen Cove school district.

The trouble is with the state formula used to calculate need. It has repeatedly over-funded some districts and short-changed others.

All of the Harmed Suburban Five have seen increases in poverty, enrollment and English language learners, but the state funding has not kept pace with their growth leaving these districts funded at around 50 percent or less of their need.

"We do have to revisit the formula," said Senate Education Chair Shelley Mayer during a meeting with parents.

Mayer expressed doubt the problems with the formula would be resolved this year, but promised to look for ways to direct additional dollars to these struggling schools to off-set potential cuts and to continue working to resolve the formula's failures in the new fiscal year.

"I'm concerned with how can we drive money to the district," Mayer said. "You have my commitment to work on that."

The biggest obstacle for these parents remains Gov. Cuomo who's proposing a fraction of the education funding lawmakers have proposed.

State leaders estimate the education fight will likely continue until the final hours of budget negotiations possibly stretching into the weekend.

Parents left Albany on Thursday, encouraged by the number of lawmakers who heard their pleas, but fearful that this year will bring more of the same, big promises and little progress.