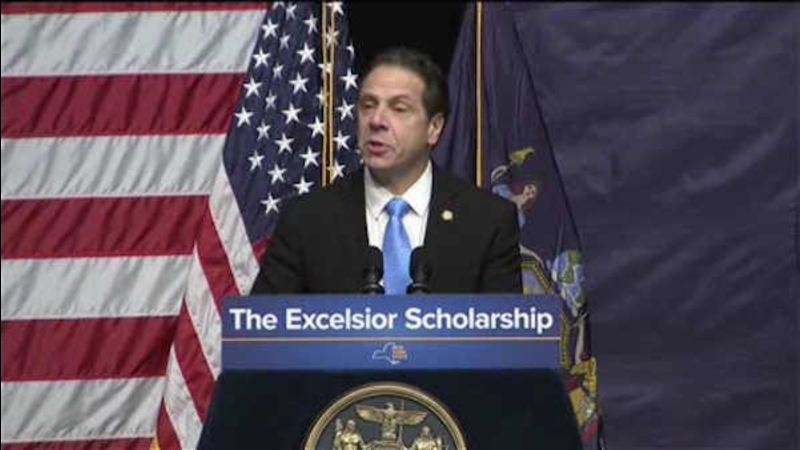 The Democrat unveiled his plan Tuesday morning at LaGuardia Community College in Queens alongside U.S. Sen. Bernie Sanders of Vermont.

During the senator's unsuccessful run for the Democratic presidential nomination last year, Sanders pushed for free tuition at all U.S. public colleges.

Cuomo's proposal would have the program starting this fall. The governor's plan would require approval by the Legislature.

New York has the nation's largest public university system, with 440,000 students spread among 64 campuses across the state.

The announcement came at a building that used to be the Sunshine Biscuit Company, but Cuomo and Sanders stressed the harsh reality that many manufacturing jobs are gone.

"Those days are over," said Cuomo. "This economy you need a college education if you're going to compete. We have 7.5 million jobs in the state today, more jobs than have ever existed in the history of the state of New York. That's the good news. The bad news is 70 percent of those jobs require a college education."

"30 or so years ago, we had in this country the highest percentage of college graduates of any nation on earth," said Sanders. "We were number one. Today we are number 11. That is not what America is supposed to be about."

No details were released on how the plan would be paid for.

The average student loan debt for a New York college student for whatever university is $32,200 and the average tuition to CUNY or SUNY is $6500 per year.