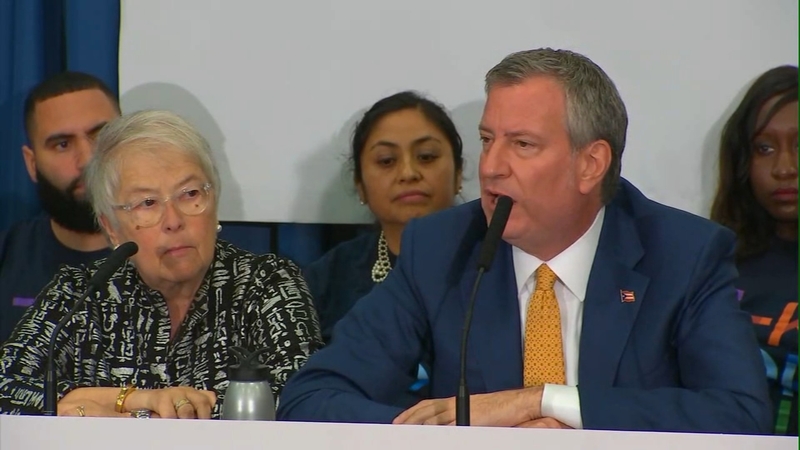 NYC gears up for influx of students from Puerto Rico

NEW YORK (WABC) -- As Hurricane Maria was bearing down on Puerto Rico, Nestor Ortiz was sitting in Brooklyn, where he'd been trying to find work and eventually move his wife and three kids to New York City.

He was video chatting with his wife back home as the storm intensified., and he thought he saw his neighbor's house disintegrate before the line went dead.

Ortiz was in the dark for weeks, unable to reach his family. And when he finally did, he learned his house was destroyed. His kids' schools (to the extent they even existed anymore) had been turned into shelters, and his family now walks half a mile for marginal cell service. There's still no power, and no water.

With no end in sight to the misery, Nestor scraped together enough for plane tickets. His family will fly to New York City at the end of the month, where they intend to start a new life along with countless other families, expected to migrate north to New York City.

On Thursday, Mayor Bill de Blasio and Schools Chancellor Carmen Farina outlined plans to accommodate the thousands of new students they expect will arrive over the next several months. They said they are reaching out to schools to see who has space, but the challenge is they don't have an estimate of how many spaces they'll need.

"We're prepared, we just don't have a real good estimation of how many might be coming," Farina said. "We don't expect a big influx until after Thanksgiving, because there's still not regularly scheduled flights in and out."

But before they arrive, the Department of Education is working on a plan to figure out enrollment options. There are protocol that were put in place after Hurricane Katrina devastated Louisiana.

"This school system has a lot of capacity, a lot of strength, to say the least," de Blasio said. "And we would be ready to handle any additional families who come up."

The DOE says it has surveyed principals about available space, identified parts of the city that might have an influx and equipped for a potential language barrier.
Report a correction or typo
Related topics:
educationnew york citybill de blasioeducationhurricane mariacarmen farinapuerto rico
Copyright © 2021 WABC-TV. All Rights Reserved.
More Videos
From CNN Newsource affiliates
TOP STORIES