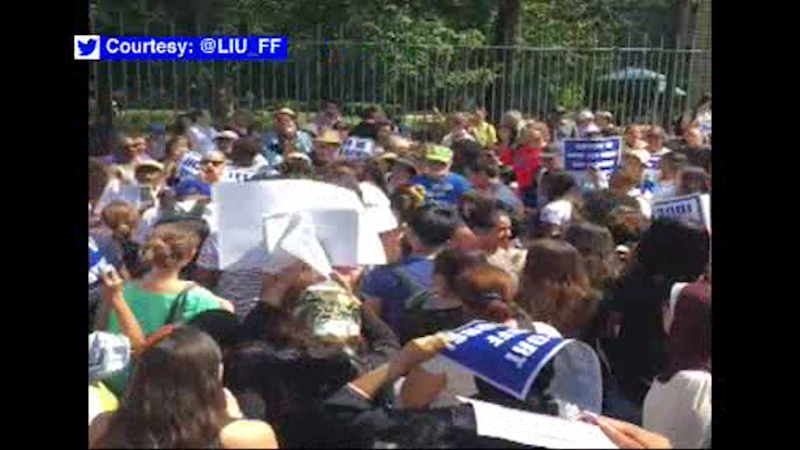 NEW YORK (WABC) -- Hundreds of students walked out of Long Island University's Brooklyn campus Thursday in support of professors who are now locked out due to a contract dispute. More walkouts are expected on Friday.

"They were incredible, they were not going to be fooled by this charade," said Becky States, a professor.

"We have a right, without us, there is no institution, I feel like sometimes colleges forget that," said Vitelina Doll, a student.

This show of solidarity came on the heels of what happened Wednesday, on the first day of classes.

The administration made its move and took the unprecedented action of locking out more than 200 professors.

Their contract expired August 31st, but things came to a boiling point Tuesday after both sides could not reach an agreement.

"The university decided at this time that we were going to take a proactive stance. Committed to their students to open on schedule and in a normal fashion," said Gale Stevens-Haynes, LIU Brooklyn Vice President and COO.

Union members rejected the latest offer by a vote of 226 to 10.

Now teachers can't get into their offices and their email accounts have been blocked.
"We have an electronic black board system in which we post all of our syllabi on and we're locked out of that," States said.

The two main sticking points are salary and the struggle over who has control over academic standards.

For now replacement teachers are there and the university insists they are qualified.

"Every class I go to, they just dismiss us after five minutes, after five or 10 minutes, yeah they tell us they have no material to teach," said Gus Dowier, a student.

With tuition right around $35,000 a year he may transfer.

"If you don't get the quality education we're supposed to get, what else could you do," Dowier said.