WABC
By Eyewitness News
JERSEY CITY, New Jersey (WABC) -- Jersey City teachers went on strike Friday after no deal could be reached between the union and the school board.

It's been 20 years since teachers in Jersey City have gone on strike. Schools had have a half day Friday, and district officials posted on their web page that it was "because of the STRIKE" called by the Jersey City Education Association.

A robocall message to parents added, "The school board has been working hard to negotiate an agreement with the teachers' union and we are disappointed that the union has decided to take this disruptive step."

Most students were instructed to sit in the schools' auditoriums. They were dismissed at 12:45 p.m.

The union announced the strike Friday morning. Teachers were told to be prepared for one, and Greco said Wednesday that if a contract was not approved Thursday night, then "game over."

Contract negotiations resumed at 9 a.m. to review a contract offer that appears to have emerged from the school board last night.

Friday morning, substitute teachers showing up had to have a police escort to break the picket line as protesters yelled "shame."

The JCEA entered into contract negotiations with the board last May, but talks have hit a snag over healthcare.

Because of the delay, teachers have been staging protests for the last eight weeks outside of all 40 Jersey City schools before class.

The district has previously said that schools would remain open during a strike and they have offered to pay substitute teachers double during a work stoppage.

Teachers have worked under an expired contract since Sept. 1.

"Nearly 4,000 members of the Jersey City Education Association (JCEA) take to the streets in the first strike in more than 20 years, following months of negotiations with the Jersey City Board of Education that have not led to an acceptable offer from the board.

"JCEA's fight for affordable health care and a fair contract settlement remain the pivitol issues. The two parties have met more than 20 times since they began negotiations in May of 2017. The union has come to the table time and time again and is eager to reach a settlement."

The head of the union responded saying, "My members are prepared to step up and take on this fight for everyone, knowing full well that it will be a long, difficult process." 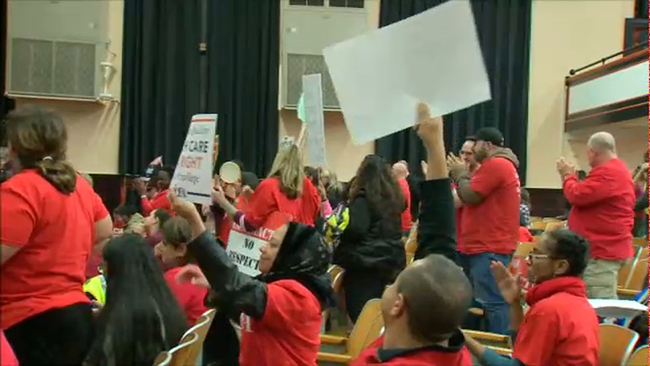