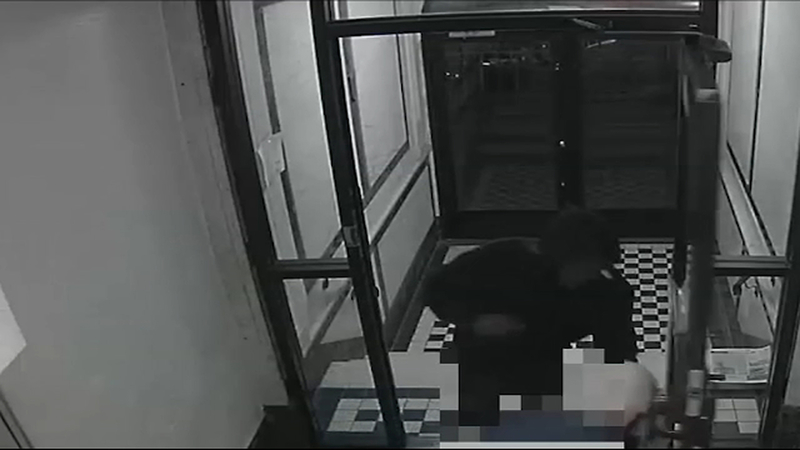 GREENWICH VILLAGE, Manhattan (WABC) -- Police are searching for the heartless thief who robbed an elderly woman and punched her in the face.

It happened right inside the woman's Greenwich Village apartment lobby near West 13th St. and 7th Ave. around 6:50 p.m. on Friday.

The suspect followed 81-year-old Barbara Ann Davison into her building, and as she opened the door to the vestibule, the suspect punched her several times in her head and face.

The victim fell to the ground and that's when he grabbed her handbag and took off.

Davison is an actress who has lived in the building for the last 68 years. She has been in a number of films and television shows.

81 y/o mugging victim is Barbara Ann Davison, an actress currently in "Going in Style" w/Michael Caine. "Not the 15 min of fame I wanted." pic.twitter.com/A52urLxYAN

Davison said her bag contained credit cards but not much cash.

She suffered bumps and bruises to her head and face, but refused medical attention at the scene.

"It happened so fast," said Davison. "Whether I was walking up the stairs to the inside door or whether I had actually gotten the key in the door, but at some point I felt a really bad blow to my head. I turned around, I didn't see the person because I was facing inside. Turned around and saw my big red bag flashing out the door and a guy attached to the other end of it."

She had a warning for other New Yorkers. "I'm a person who's been very careful, it's a good neighborhood," she said. "But if what happened to me has any meaning, just be careful, especially if you're an older woman. Because I thought I was careful but I wasn't wholly focused on what was going on around me."

Davison has appeared in the films 'Going in Style', 'All Good Things', and 'You Don't Mess with the Zohan'. She has also been in the TV show 'Orange is the New Black'.

The suspect is described as a man who was last seen wearing all black.