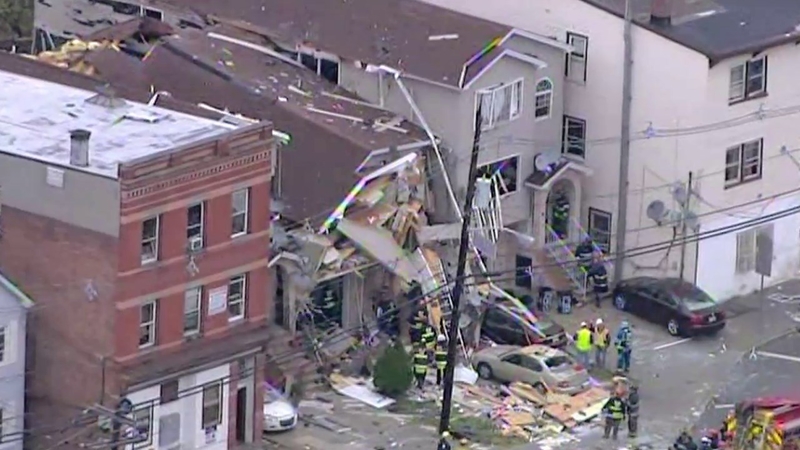 ELIZABETH, N.J. (WABC) -- A survivor of a building explosion in New Jersey that left one person dead and 15 more injured describes the scene as nightmarish.

"I just went to sleep and woke up in a nightmare," said Wayne Sheppard.

Sheppard was sleeping in a second-floor apartment on Magnolia Avenue in Elizabeth when the house next door suddenly exploded. His wife Rhona and 10-month old son Rajon were also in the front of the home.

"They were in the living room she had just taken him out of his bedroom. His bedroom window is directly across from the house that exploded," Sheppard said.

They were all able to stumble out through the rubble, to safety. Paramedics took them to Trinitas Regional Medical Center, along with three others.

A 33-year old suffered minor injuries, and a 19-year old, "who's being treated for minor trauma at this time. She just got out of cat scan so we are still waiting for results," said Emergency Department Director Mercy Mallari.

An 8-year old girl was brought to the center later. "There were explosions laterally. She was two or three doors down and a mirror came off the wall and stuck her in the back. She is going to be fine," said Dr. John D'Angelo, Chairman of Emergency Medicine at the hospital.

Two of the victims thought to have been in the house that exploded suffered severe burns, doctors say. Because of the large number of victims, 16 in all, Dr. D'Angelo had also rushed to the scene. He says one victim died there.

"It's difficult. We see trauma daily but to see someone walk out of their home with severe burns was devastating for everybody," said D'Angelo.

But Wayne Sheppard is certainly thankful he and his family made it out alive.

"It's bad. We probably lost everything. Except each other and that's more important. You can always get stuff back, stuff's not important," said Sheppard.

A person unaccounted for earlier has been found safe, according to fire officials.