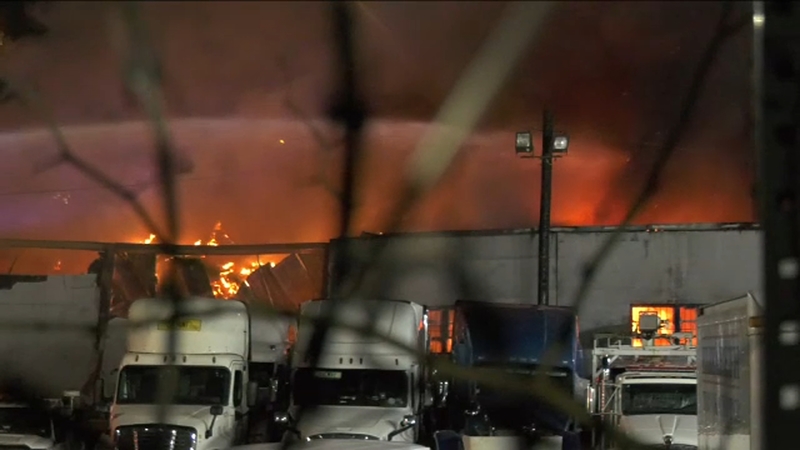 The fire at Elizabeth Truck Center on North Avenue spewed heavy smoke and flames that could be seen from nearby Newark Airport.

The fire broke out in the rear of the large facility just after 11 p.m. Sunday.

The building's roof collapsed as around 100 firefighters battled the blaze.

Explosions were heard by firefighters as the flames spread through numerous trucks, tractor-trailers, and SUVs parked at the facility

"The fire overrun the entire complex," Elizabeth Fire Chief Thomas McNamara said. "We do have total roof collapse, we had some collapses in the rear of the building, so we just had to make sure we set up a safe perimeter."

Elizabeth firefighters used the police department's drone to get an eye on the sprawling structure.

No one was believed to be in the business at the time the fire started. It may have been smoldering undetected during the day Sunday.

"It looks like we had a lot of flammable liquids, vehicles on fire in the business. It was probably gas tanks, some storage tanks in the building. The amount of vehicles they had in there, right now we're still trying to figure out how many," McNamara said. "They had anywhere from tractor trailers, to regular SUVs that were in there."

Elizabeth Truck Company says they're the largest commercial vehicle collision and repair facility in the Tri-State.

The fire damaged a large building used for installs, but not all of the business.

Employees spent hours moving vehicles as they tried to examine the extent of the damage.