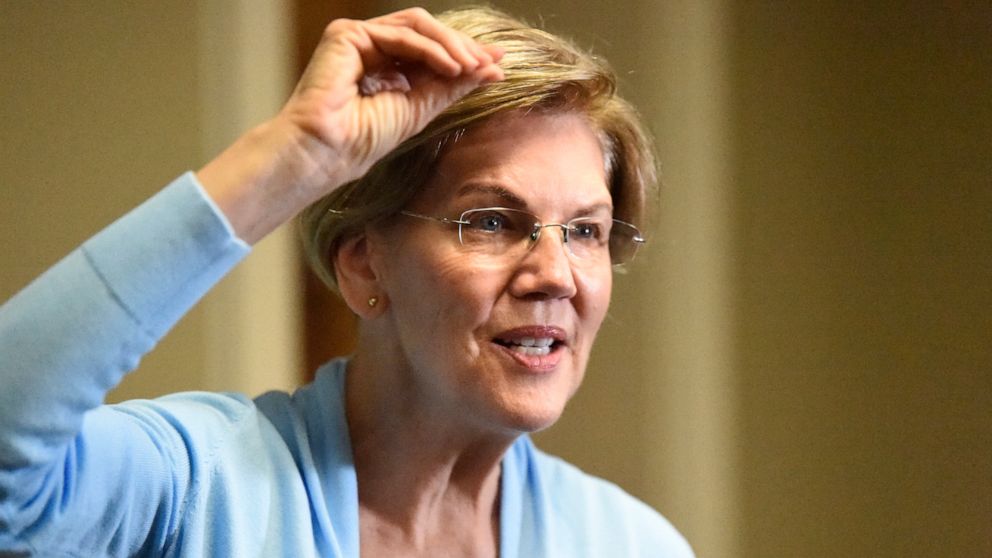 ABCNews
By CHEYENNE HASLETT
Sen. Elizabeth Warren's campaign described for the first time the majority of the paychecks she received during her time as a lawyer, a move that comes on the heels of repeated pressure from South Bend, Indiana, Mayor Pete Buttigieg.

Warren made around $1.9 million in compensation from private legal work dating back to 1985, according to documents released Sunday night.

Warren represented, consulted for or provided expert witness to a handful of big corporations from 1985 through 2009, around the time she was teaching law at Harvard University. According to the documents released by the campaign, Warren's income from the casework ranged from less than $10,000 to as much as $212,000.

For five different cases out of around 50, her campaign reported it was unable to find compensation records. It is unclear how much she made on those cases.

In a handful of cases, the campaign also pointed out that some of the money Warren made as a corporate lawyer was included in the tax returns, dating back to 2008, she's already released.

According to the campaign, the income details were pieced together from public records and campaign research. ABC News has not independently confirmed the compensation details.

"Any candidate who refuses to provide basic details about his or her own record and refuses to allow voters or the press to understand who is buying access to their time and what they are getting in return will be seen by voters as part of the same business-as-usual politics that voters have consistently rejected," Kristen Orthman, Warren's campaign communications director, said in a statement.

Warren's campaign first released a list of her former corporate clients in 2012, as she came under pressure from Republican opponents to be more transparent. At the time, Warren had called on her opponents to disclose their own corporate ties.

This latest move Sunday evening comes after Buttigieg called for Warren to release her tax returns from before 2008 and detail compensation earned by representing different corporations, a move Buttigieg's campaign argued was in the interest of transparency.

Buttigieg, however, has also separately been under pressure to put out more details about his time working for a large corporation, the consulting firm McKinsey and Co.

Many have called on the candidate to break a non-disclosure agreement he signed with his former employer and disclose for whom he worked and when. Though he has not committed to releasing the names of former clients, he recently told reporters the company is putting him "in a difficult position" and that it's "very important" to offer "as much transparency as possible."

Warren dismissed Buttigieg's calls to see more of her tax returns, instead pointing to the closed-door fundraisers held by his campaign.

"Look, I understand he would like to deflect from what he's doing right now, but he's gonna be in New York next week. And he's gonna do three big fundraisers with rich people," Warren told reporters on Friday. "He should open up the doors and let someone from the press come in and hear what promises he's making to rich folks and what he's saying that's different from what he says when he's out on the trail."

As a candidate for the presidency, Warren has pledged not to attend closed-door, high-dollar fundraisers for her campaign. She does, however, attend Democratic National Committee fundraisers and her campaign has held fundraisers where she is not in attendance.

In recent days, Buttigieg has told reporters his campaign is considering opening up fundraisers typically closed to press.

Warren also has defended her decision not to release her tax returns prior to 2008, saying she'd already put out 11 years of returns.

"That's exactly 11 years more than Donald Trump. It is three years more than Barack Obama did at the same point. And I have already put out a list of all of the legal work that I did in all the years that I was in teaching, at least everything that I could find," Warren told reporters in New Hampshire Saturday.

Warren doesn't intend to release additional returns. Her campaign on Sunday emphasized that point, adding that her returns also don't itemize income earned from individual cases as do the documents just released.

The release reveals a range of work Warren did in each case, from testifying as an expert witness against Phillip Morris International, a tobacco company, to representing a plaintiff on toxic waste dumping in Massachusetts during the 1980s, to her work with Dow Corning as the chemical company sought to staunch its liability in a large class-action suit over silicone breast implants.

The case summaries put out by the Warren campaign buttress her brand of working-class advocacy, though that's not how some involved with the cases recall Warren's role.

"Elizabeth served as a consultant to ensure adequate compensation for women who claimed injury from silicone breast implants who otherwise might not have received anything when Dow Corning filed for bankruptcy," according to the description of one case from the Warren campaign. "Thanks in part to Elizabeth's efforts, Dow Corning created a $2.35 billion fund to compensate women claiming injury from Dow Corning's silicone breast implants. The vast majority of women with claims against Dow Corning supported the creation of this fund."

But Sybil Goldrich, a top consumer advocate and the trustee for the 138,000 plaintiffs in the Dow settlement, told ABC News in October that Warren's work effectively froze all lawsuits nationwide -- both individual and class-action litigation -- and that the first settlement checks weren't issued until years later, in 2004. Part of the delay involved appeals to the settlement agreement lodged by individual plaintiff attorneys.

During that time, many of the older women -- some who got breast implants as far back as the early 1960s -- passed away, while another 20% of plaintiffs continued to suffer from breast cancer.

Warren's compensation for that case was $19,942, according to the campaign.

In another case, on behalf of plane manufacturer Fairchild Aircraft after a crash that killed four people, including NASCAR star Alan Kulwicki, Warren argued that the manufacturer should be shielded from liability because the plane that went down was made by a company that had gone bankrupt. The court ruled against that stance, later vacating the decision. Warren was paid $9,812 for that case.

"Elizabeth represented the company in a lawsuit to try to protect hundreds of jobs at the company after new investors had saved it from closing its doors and laying off its workers," the Warren campaign wrote in its description of the case. "In the end, the company survived and 1,000 people had jobs because of it."