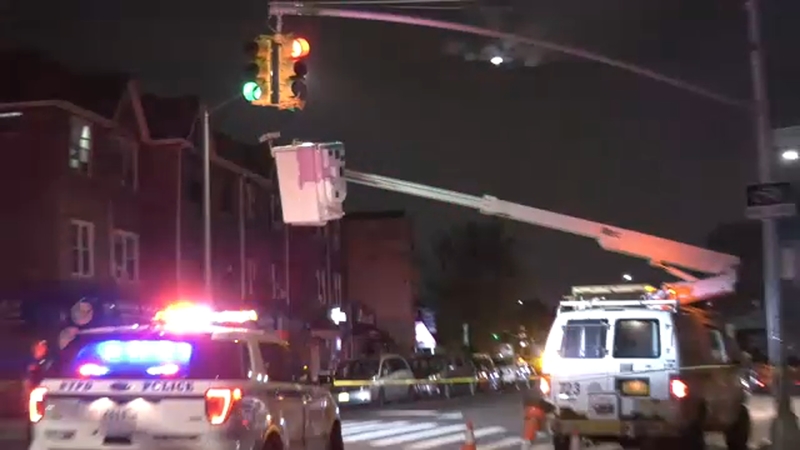 ELMHURST, Queens (WABC) -- A 59-year-old electrician fell to his death while making repairs to a traffic light after his work vehicle was struck by a box truck in Queens early Thursday.

It happened at the intersection of Grand Avenue and Goldsmith Street around 2:45 a.m.

Surveillance video shows the worker, identified as Jose Polanco, raising the bucket on his cherry picker. About a minute later, the box truck enters the frame traveling west down Grand Avenue.

The rest of the video is too graphic to show, but it shows the truck smashing right into the bucket and Polanco -- who worked for Welsbach Electrical -- tumbling out and falling to the ground.

He was taken to Elmhurst Hospital, where he died.

"When I came down I could see them working on the lights, and I was very surprised," area resident Maria Zorovich said. "We have to have more precaution, maybe. I don't know, maybe they're going to fast sometimes."

It is unclear what safety procedures the company has or why the box truck hit the bucket.

Polanco's coworkers came to the scene to have the van towed away, and one of them described him as hard working. Neighbors were shocked to learn what happened.

"That person has his family and I suppose right now they are very upset because of that," area resident Amado Jimenez said. "You don't know when you're going to die. You have to live your life."

The driver of the box truck stayed at the scene, and so far, no criminal charges have been filed.

"It's an unspeakable tragedy," Welsbach Electrical said in a statement. "Every single person deserves to go home from work. Right now, we're gathering the facts."