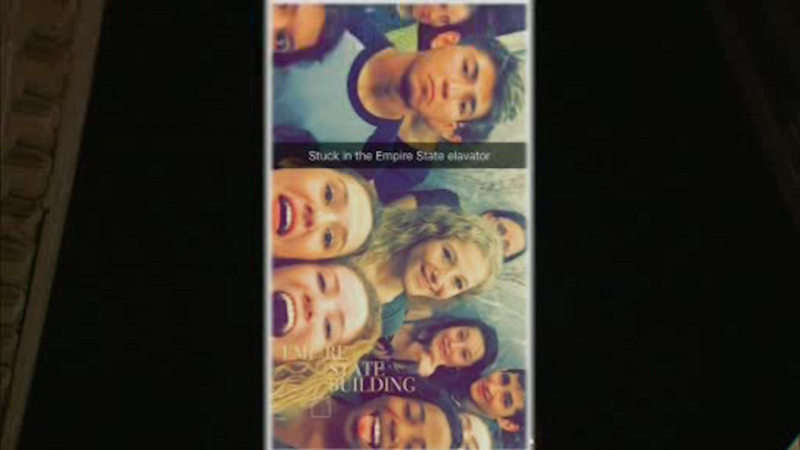 NEW YORK (WABC) -- It was a horrifying experience that ended in harmony for members of the Rio Rancho High School Choir.

"It was scary it really was," a student said.

While visiting the Empire State Building Thursday evening, the group became trapped in an elevator dangling with a snapped chord nearly 40 floors above the ground.

"When it stopped, it actually dropped like two floors and we were a little scared, but we weren't sure it wasn't working," said Rose Crum, a choir member.

"I was really panicking the entire time mentally, but everybody helped me cheer up," said Brandon Gresham, a choir member.

"We also just sang a couple pieces that we had performed recently just to make light of it," said Casey Hennigan, a choir member.

Firefighter Rob Clark was the first to get inside the car with the teens and diffused their fears.

The rest of the FDNY team brought a plank across from another secure elevator across a five-foot span they would eventually cross over with harnesses to safety.

"They were scared, so we just tried to calm them down," Clark said.

"We also didn't tell them how high up they were, so they were under the impression that they were only between the 2nd and 3rd floor. Once we were bringing them down we kind of told them where they were and a big wave of relief came over them," said Lt. Brendan Mohan, FDNY.

For many in the choir this was their first trip to the Big Apple, but never in their wildest dreams did they imagine their getaway ending on such a high note.

"I don't know a lot of people that can say I got stuck in an elevator in the Empire State Building, but it happened and it's a good memory," a choir member said.

"We hear FDNY is the best I would probably agree with that now they were amazing," said Becky Talbott, the choir director.