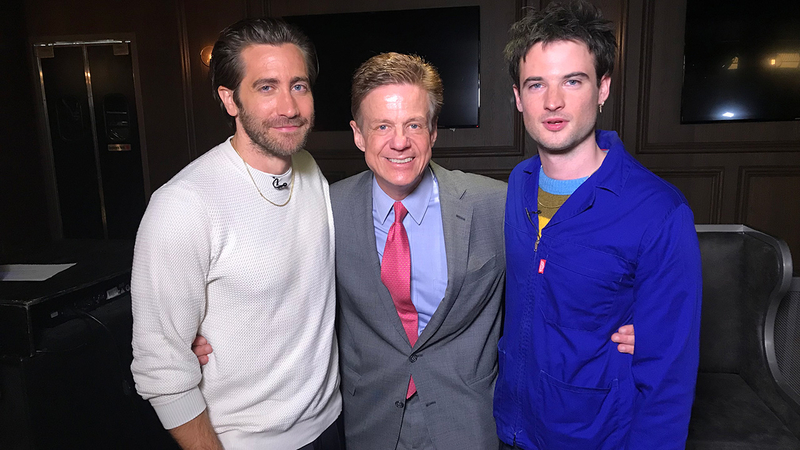 NEW YORK CITY (WABC) -- Actor Jake Gyllenhaal is back on Broadway with a play that puts him on stage with a monologue lasting more than an hour.

I've come to truly admire the way he has leveraged his fame as a movie star and capitalized on his charisma to draw fans to challenging work on Broadway.

Right now, the star is appearing solo in a one-act play. His friend Tom Sturridge appears in another monologue, and the result is an attraction called, "Sea Wall/A Life."

"A Life," concerns a man who is about to become a dad at a time when he must still struggle with the death of his own father.

"Who wants to think about the future when the present is this monumental?" Gyllenhaal's character asks from the stage.

Jake may be working solo - but he is not alone.

"The other performer is the audience in this case, and the interaction every night changes," he said. "It's different every single night, depending on the audience. Things happen through out every performance that we couldn't expect."

He is famous, of course, but Gyllenhaal has never been content to rest on his Hollywood laurels. Even the films he makes range from blockbusters like "Spider-Man: Far From Home" to quirky choices like "Velvet Buzzsaw," set in the art world with a left turn into the supernatural.

Sturridge is a co-star from that film, and he shares the billing by appearing the second one-act monologue called "Sea Wall."

"I sometimes think about what it's like talking to people at a dinner party," he said. "Like sometimes when you're telling a group of people a story, they react to it in very different ways."

Members of the audience aren't shy about sharing their reactions.

"(Both plays) bring up so many different stories and different experiences they've had," Gyllenhaal said.

And he insists that these two plays -- rooted in love and loss -- are more important now than ever before.

"We live in a time of isolation in a lot of ways," he said "And this show seems to let everybody put everything aside and come together again in all those ways that you come together in your community."

He said the reactions of people who have talked to him after seeing this show have moved him almost more than anything he has ever done. But you will have to act quickly to see him and Sturridge: "Sea Wall/A Life" is set to close the end of September.