At the Oscars, 'The Cave' aims to provide hope to Syria 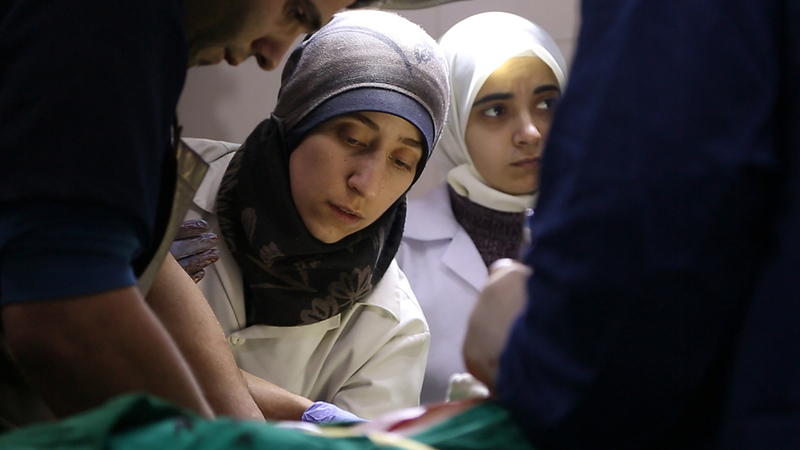 At the Oscars, 'The Cave' aims to provide hope to Syria

LOS ANGELES -- Home is a complicated notion for Feras Fayyad, the director of the Oscar-nominated Syrian documentary "The Cave." His family home in Syria is believed to have been taken just weeks ago as President's Bashar al-Assad's Russian-backed forces seized the area. His family is living in temporary housing near the Turkish border. For several years, Fayyad has been living in exile in Copenhagen.

After a lengthy struggle to obtain a visa to attend Sunday's Academy Awards that included an outpouring of support from the film community, Fayyad finally arrived last week in Los Angeles. Being among filmmakers and friends he has made through his two Oscar-nominated films, Fayyad said, has been a relief. Even a little like being home.

"There's nothing harder than losing your home, nothing harder than losing everything around you," said Fayyad in an interview by phone. "But there is something that gives me hope that I can speak about this and bring more attention to this situation and remind the Syrian people: We are still human, we still have a dream, we still believe in justice. For this little moment, I would love for 'The Cave' to bring hope to my country and my people."

"The Cave," Fayyad's follow-up to this Oscar-nominated "The Last Man in Aleppo" (which made him the first Syrian filmmaker nominated for an Oscar) is one of the five films nominated for best documentary at this Sunday's Academy Awards. Shot between 2012 and 2018, it depicts a subterranean medical facility in Eastern Ghouta during constant bombing by Syrian government forces and their Russian allies. The hospital lacks much of what it needs, including anesthetics and food, and the incoming flow of injured and dead - many of them children - is ceaseless. A smell of chlorine fills the air after a chemical attack.

The hospital was administered by Dr. Amani Ballour, a young woman trained as a pediatrician, who stayed behind to save as many lives as she could. "They took the light," she intones in the film. "We are living in darkness." Ballour was the only woman leading a hospital in Syria; even as she's tending to wounded, she's also combating deeply ingrained misogyny.

"When I was young, no one tried to tell me that I had rights, that I can be something important. All the people around me said, 'You'll get married and have children,'" Ballour said in an interview by phone. "I wanted strongly to change this image, to tell young girls that you have rights, that you can be very important, that you are no different than the boys."

Like Fayyad, Ballour is coming to the Oscars from a life in exile. She fled Syria in 2018 after the hospital was overtaken and moved to Turkey. She's applying for asylum in Canada. The United States last year abruptly pulled forces out of Syria, a withdrawal that drew a rare bipartisan rebuke from Congress. President Donald Trump's administration has slashed the number of refugees it will accept from Syria.

Syria's nine-year civil war have been called the greatest humanitarian crisis in the world. Since December, the Syrian government has advanced into the country's last rebel stronghold in northern Syria. Following the more than 6 million refugees already caused by the war, the United Nations on Monday said half of a million more have been displaced since Dec. 1, 80% of them women and children.

It would be hard to fathom a more sorrowful place than the hospital of "The Cave." But it would be equally difficult to imagine a more inspiring figure than Ballour.

"I wanted to bring all of the struggle against the sadness, the depression, the death, the daily attacks on the hospital, where we can see the most courageous people and a woman who is fighting to make a space for hope," says Fayyad. "We own the narrative here, completely, proudly."

Fayyad and Ballour are both coming to the Academy Awards with a personal mission to call for justice in Syria and to signal to their countrymen that all is not hopeless.

"To be the voice for the people in Syria who are voiceless right now, to support them and try to get help in any way, this is my goal now," says Ballour, speaking in a midtown Manhattan high-rise. "They have nothing in Syria, nothing. Even buildings like this, we don't have."

Fayyad has twice been jailed by the Syrian government for a total period of 18 months, so his ability to shoot "The Cave" on location was challenging. He depended heavily on his local cinematographers, communicating remotely from Copenhagen. Four staff members of the hospital died during filming.

It was difficult for Fayyad and Ballour just to get to the Oscars partly due to the U.S. travel ban on seven predominantly Muslim countries, including Syria. Fayyad's visa was ultimately granted after protests were lodged by PEN America and the International Documentary Association. Preventing him to travel until last week had its own cost, diminishing how much time Fayyad had to do bring attention to Syria before the ceremony. (Another film about war-torn Syria, Waad Al-Kateab and Edward Watts' "For Sama," is also nominated for best documentary.)

But the campaign around "The Cave," a National Geographic film, is ongoing. Following the Oscars, Ballour will travel the U.S. and Europe in a series of fundraising events for the Syrian American Medical Society, which helped secure Fayyad's visa. Screenings are planned at the United Nations and at the Hague. An Oscar nomination is just one of many honors for Ballour, who was recently awarded the Council of Europe's Raoul Wallenberg Prize, an award named for the Swedish diplomat who saved thousands of Jews during World War II.

They come to the Academy Awards with heavy hearts, intent on providing a beacon for Syria. But they aren't immune to the celebrity of the Oscars. At the film academy's luncheon last week, Fayyad met Brad Pitt and Al Pacino. Ballour, on her way to Los Angeles, has one other goal, besides her self-appointed duty to her country. She says: "I want to see Tom Cruise!"