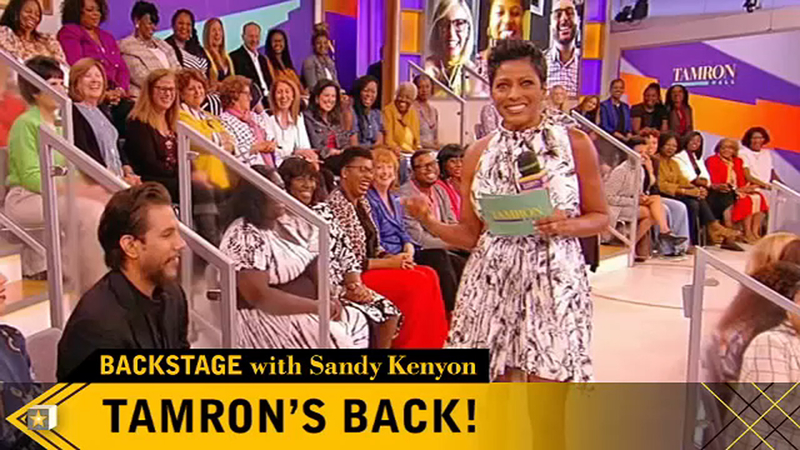 NEW YORK (WABC) -- Tamron Hall is back, and this time, she's got her own talk show on ABC -- and she says the feeling is like coming home.

"I grew up in rural Texas, but I've also lived in some of the greatest American cities you can imagine," she said. "New York City being one of them, where my show will be taped every day."

She debuted her self-titled show Monday, and she says her goal is to bring experiences and conversations to an all-inclusive table.

"I think that the empathy that I have, you know, it's come from the people I've interviewed," she said. "I was in the field reporting for 20 years, so I think that any skills that I have to relate to people that is heartfelt, I learned, yes, from my family, but I learned from being a reporter and being on someone's doorstep and having them talk to me. It's been the greatest part of my journey, and that's what I hope to bring to the show."

Hall became a mom at 48 after the birth of now 4-month-old son, Moses, with husband Steven Greener, a music executive. Now, she the newest addition to ABC's daytime lineup.

"There's not a show like this right now, and I say that and I get a little butterfly, because it is hard," she said. "People tell you to be proud of yourself, and then when you're proud of yourself, it's like, wait a minute. But that's also life, and talking about owning your victories. And part of me returning to television with this great team is a victory."

Hall's show looks to find the best stories to tell from her guests, her audience and herself. She knows many will make comparisons to other big name talk show hosts, but this one is all Tamron.

"I'm embracing my journey," she said. "I'm embracing the fact that the audience has welcomed me back. I hope I make new friends. I get emotional. My husband said, 'If you bring your real self, everything will be OK.'"

"Tamron Hall" debuted September 9 and is distributed in national syndication by Walt Disney Direct-to-Consumer and International.

CLICK HERE to find out when it airs in your city.

We all have a story to tell – so let’s talk about it! The conversation starts 9.9.19. Go to https://t.co/VmbcmEvPpK for where to watch. pic.twitter.com/lLWrOxSchO