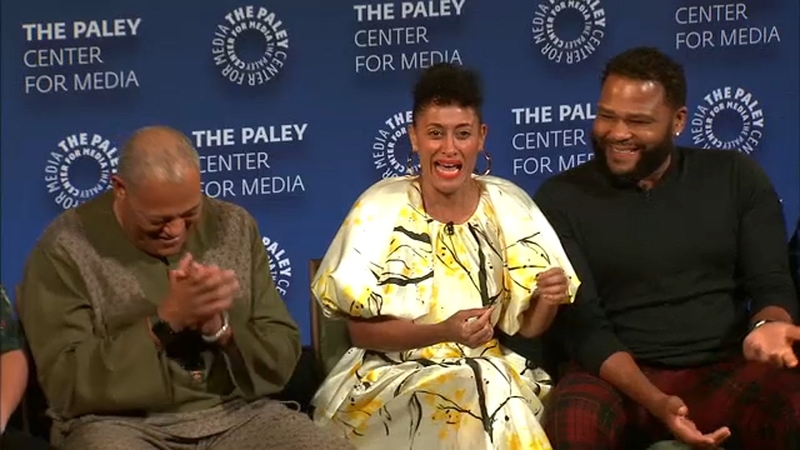 MIDTOWN, Manhattan (WABC) -- The folks from "Black-ish" gathered at a temple of television in Midtown Manhattan: The Paley Center for Media is the home of some of the greatest TV ever produced, and the invitation to meet and greet here is a sign you've made your mark on the medium.

Members of the cast of "Black-ish" traveled to the city from the West Coast to meet fans as part of PaleyFest NY. Star Anthony Anderson said was a privilege.

"To be able to share space with them and answer their questions about our show, and our process and how it came to fruition, is always good for us and for them," he said.

The screening and panel discussion were part of a two-week celebration of television at The Paley Center, a place that Tracee Ellis Ross said "is one of the institutions that etches us in the culture, and sort of places us in the narrative of television in a very important way."

The stars of the sitcom were joined by veteran character actor Laurence Fishburne, who plays Pops on the sitcom, along with young actors who play Dre and Bow's children.

Actress Marsai Martin, who plays Diane, said she's grateful to the fans who continue to support the show.

"So the fact we get to meet them and say hi, and they can hear us speak our minds in a different perspective, it's pretty dope," she said.

The chance to be a part of TV history at Paley gave the afternoon special meaning for Executive Producer Courtney Lilly, because he graduated from Columbia University and started in TV here.

"The New York end of this industry has been something that's part of my formative career early days," he said.

Soon, they will be back to work in Burbank with new awareness of just how much resonance their landmark sitcom continues to have.

Ellis Ross summed up that The Paley Center for Media "allows us to really feel the impact of the show."

Season 6 continues Tuesday evening, and that's when this year's PaleyFest NY will come to a close. CLICK HERE for more information on the event.