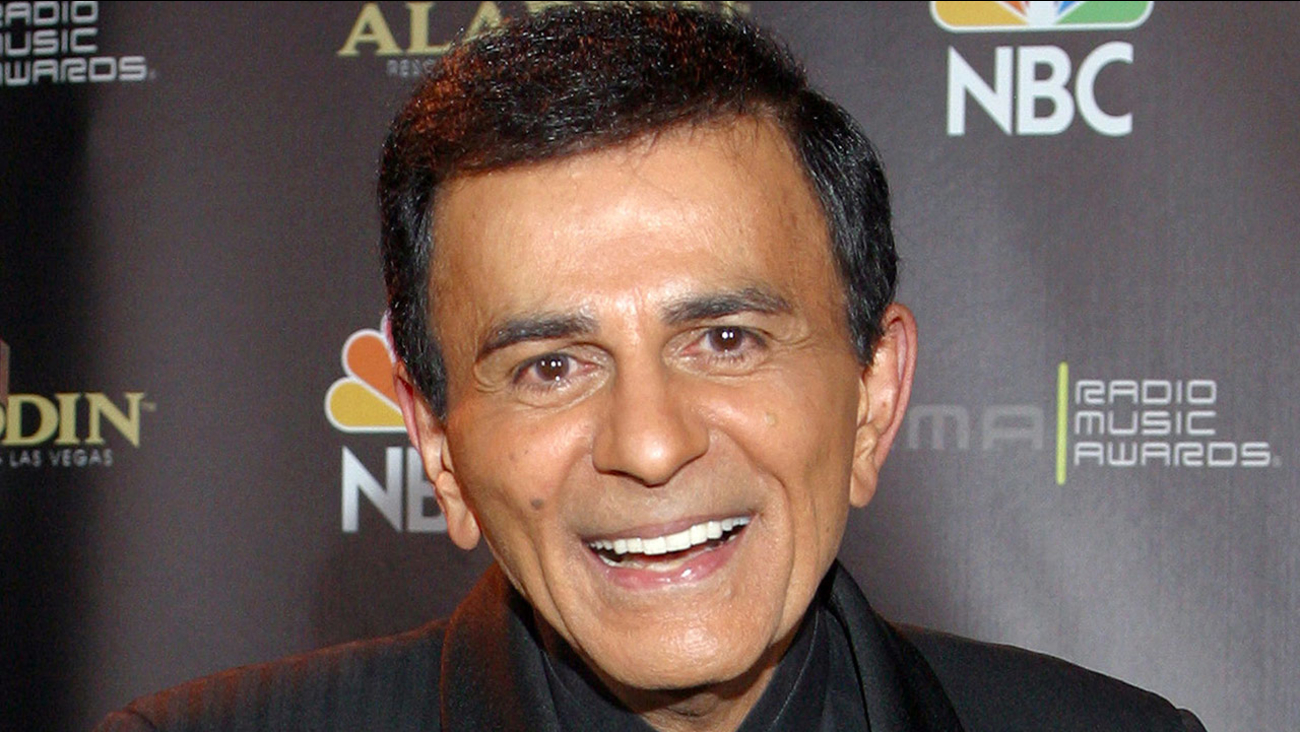 In this Oct. 27, 2003, photo, Casey Kasem poses for photographers after receiving the Radio Icon award during The 2003 Radio Music Awards at the Aladdin Resort and Casino. (AP Photo/Eric Jamison, File)

LOS ANGELES -- Three of the radio personality Casey Kasem's children and his brother sued his widow on Wednesday, claiming her actions led to his death in 2014.

The wrongful death lawsuit filed in Los Angeles Superior Court accuses Jean Kasem of elder abuse and inflicting emotional distress on Kasem's children from a previous marriage by restricting access to their father before his death.

"Casey's early death occurred as a direct and proximate result of Jean's neglect and physical abuse of Casey," the lawsuit states.

A call and email sent to Jean Kasem's attorney, H. Michael Soroy, was not immediately returned.

The longtime "American Top 40" host had a form of dementia and a severe bedsore when he died at age 82.

Kerri, Julie and Michael Kasem are joined in the lawsuit by their uncle, Mouner. The lawsuit seeks more than $250,000, although a jury would have to decide any damage award.

"We would rather see her in jail than receive one dime," Kerri Kasem said. "We don't care about the money. We care about justice."

The lawsuit follows years of legal wrangling between Jean Kasem and three of his adult children from a previous marriage. The groups fought over visitation access to Casey Kasem before his death in June 2014, with his daughter Kerri Kasem assuming control of his medical care.

A Los Angeles judge stripped Jean Kasem of decision-making authority over concerns about her decision to move Casey Kasem from a medical facility in Santa Monica, California, to a friend's home in Washington state.

Jean Kasem contended at the time she moved her husband to protect his privacy.

The 28-page lawsuit gives a detailed account of Kasem's final days, including the extent of his ailments and the family infighting swirling around him.

It states that in the months before Casey Kasem's death, his wife repeatedly left him in various hospitals for days despite the fact he was ready to be discharged. The lawsuit also details numerous confrontations about Kasem's care, and it states Jean Kasem transported his body to Norway where it was buried in an unmarked grave.

That was despite Casey Kasem's wishes to be buried at a cemetery in Los Angeles, the lawsuit states.

The lawsuit states the Kasem's children and brother are seeking "fair recompense for the suffering they personally endured from witnessing the abuse and its painful and damaging physical effect on their beloved father and brother, and the gross treatment and disposition of Casey Kasem's remains in an unmarked grave in a distant land unknown to him or his family."

"What she did to my father is reprehensible," Kerri Kasem said. "It's disgusting. It's horrific."

Los Angeles prosecutors in May rejected filing elder abuse charges against Jean Kasem, saying they could not prove at trial that her actions led to the radio host's death. An explanation of the decision stated Jean Kasem ensured her husband was medically supervised during his transport from Santa Monica to Washington, which included a brief stay in Las Vegas.

"Because of Mr. Kasem's longstanding profound health issues, this case cannot be proven beyond a reasonable doubt to a jury," the decision stated. "The development of a bedsore by itself is insufficient evidence of abuse or neglect because of Mr. Kasem's overall weakened health."

Casey and Jean Kasem were married for more than 30 years.

Casey Kasem's legacy reached well beyond music. His voice was heard as the character Shaggy in the "Scooby-Doo" TV cartoons and in numerous commercials.

His "American Top 40" began July 4, 1970, in Los Angeles. In his signoff, Casey Kasem's would tell viewers: "And don't forget: Keep your feet on the ground, and keep reaching for the stars."

Kerri Kasem and her attorneys, Troy Martin and Steve Shuman, said that in addition to trying to hold Jean Kasem accountable, they hope their lawsuit raises awareness about elder abuse.

"People are going through this across the country every single day," Kerri Kasem said.