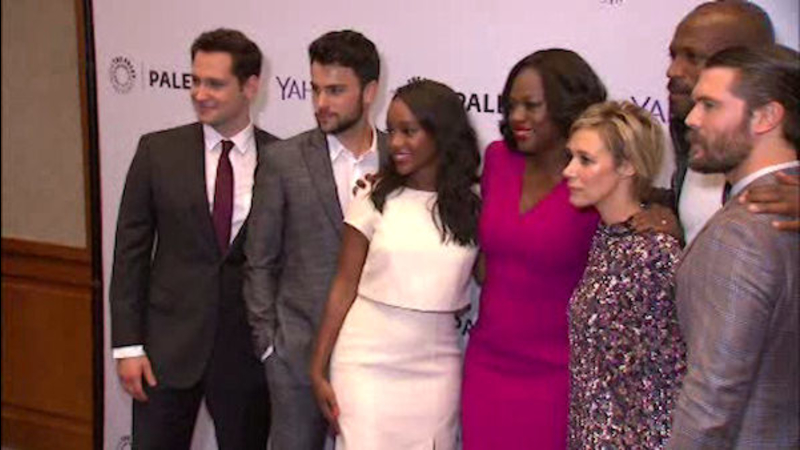 NEW YORK (WABC) -- The plot thickens once again on ABC's wildly popular "How to Get Away with Murder".

It just so happens the cast was in New York at the Paley Center for Media on Thursday night.

The show's star Viola Davis was there to talk about the hit TV show and its impact on her life.

At the Paley Center the best of TV is preserved, and their presence there is a sure sign of the show's importance.

"It means a lot, because it means that I'm a part of a bigger conversation which is what is the impact of television in the 21st century," said Viola Davis, the star of "How to Get Away with Murder".

Davis led a parade of her fellow cast members to talk about "How to Get Away with Murder".

"To be included in one of these Paley Center events is just amazing. The fact that they cherish the show as much as we do and want to bring it to audiences and discuss it more in depth is just a phenomenal honor," said Aja Naomi King, "Michaela Pratt" on "HTGAWM".

"It's having the impact that we hoped it would and at this moment it resonates with a larger audience than I ever would have dreamed," said Billy Brown, "Nate Lahey" of "HTGAWM".

One million New Yorkers watch "Annalise Keating" teach her law students "How to Get Away with Murder" each week.

"I keep having to pinch myself just because I went to drama school here in the city at NYU and I'm rolling deep with this cast that I love," said Jack Falahee, "Connor Walsh" on "HTGAWM".

The great star Cary Grant once said "It's when they stop noticing that you have to worry."

There's not much chance of that happening for this cast!