Celebrities voice their opinions about President Trump, politics at the 2017 Grammys The stars got political at the Grammy Awards before the show even started.

On the red carpet, the musical group Highly Suspect made a political statement when band member Johnny Stevens wore a jacket that said "Impeach" across the back. 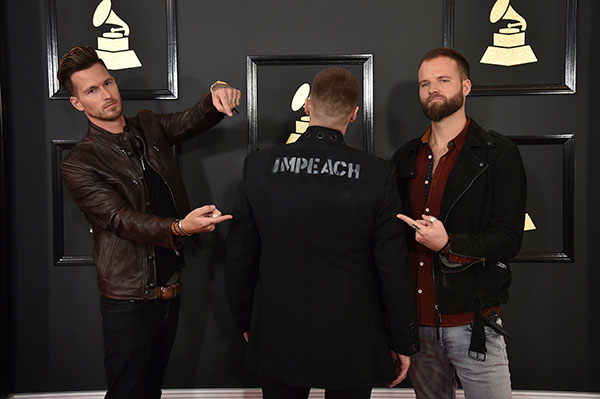 Ryan Meyer, from left, Johnny Stevens, and Rich Meyer of the musical group Highly Suspect arrive at the 59th annual Grammy Awards at the Staples Center on Feb. 12, 2017.

Singer Joy Villa, who is known for unusual attire on the red carpet, wore a red, white and blue dress that had "Make America Great Again" on the front, and "Trump" on the back. 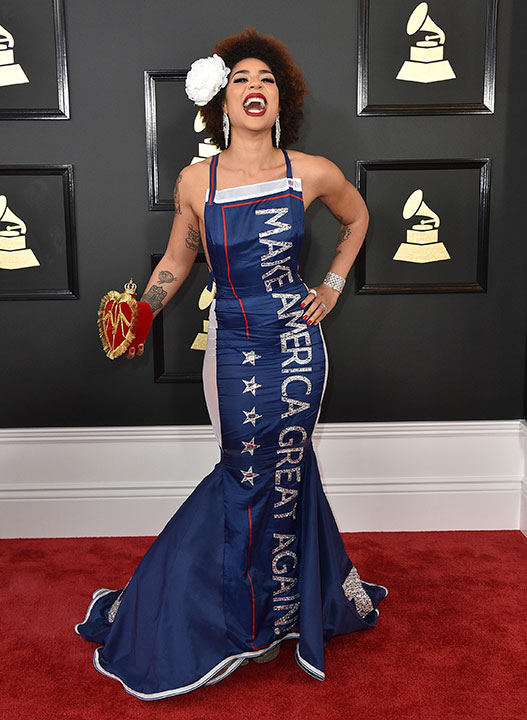 Joy Villa arrives at the 59th annual Grammy Awards at the Staples Center on Sunday, Feb. 12, 2017, in Los Angeles.

The references to President Donald Trump and his politics continued when the ceremony began.

During his opening monologue, host James Corden rapped about what to expect from the night and encouraged musicians to live it up, saying, "With President Trump, we don't know what comes next."

"At this particular point in history, our voices are needed more than ever," she said. She then quoted Toni Morrison: "This is precisely the time when artists go to work. There is no time for despair, no place for self-pity, no need for silence, no room for fear. We speak, we write, we do language. That is how civilizations heal."

Paris Jackson introduces a performance by The Weeknd and Daft Punk at the 59th annual Grammy Awards on Sunday, Feb. 12, 2017, in Los Angeles.

Paris Jackson then took the stage to introduce The Weeknd, and she started by saying, "We could really use this kind of excitement at a pipeline protest," in reference to the protests against the construction of the Dakota Access Pipeline.

Beyonce concluded her highly anticipated performance with a reference to women's rights.

When actress Laverne Cox took to the stage, she encouraged viewers to look up Gavin Grimm. Grimm is a transgender teen from Virginia who was barred from using the boys' bathroom in his high school. Grimm was born female but identifies as male. The U.S. Supreme Court will hear his case in March.

Rap group A Tribe Called Quest performed its 2016 song "We the People," which includes lyrics telling groups like blacks and Muslims, "You must go."

During the performance, they added, "I want to thank President Agent Orange for perpetuating all the evil," and made a reference to President Trump's immigration order.

While performing her new single "Chained to the Rhythm," Katy Perry wore an armband that said "persist."

Katy Perry, right, and Skip Marley perform "Chained to the Rhythm" at the 59th annual Grammy Awards on Sunday, Feb. 12, 2017, in Los Angeles.

With an enlarged U.S. Constitution projected behind her, her final words in the performance were "No hate."

Neil Portnow, the president of the Recording Academy, urged President Trump and the legislature to support the arts. 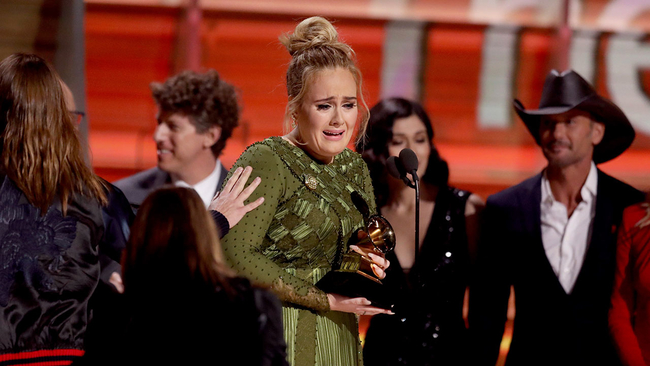 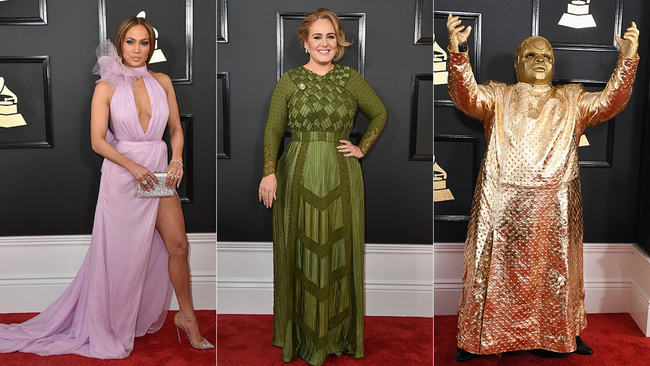