'Dancing with the Stars' does Las Vegas 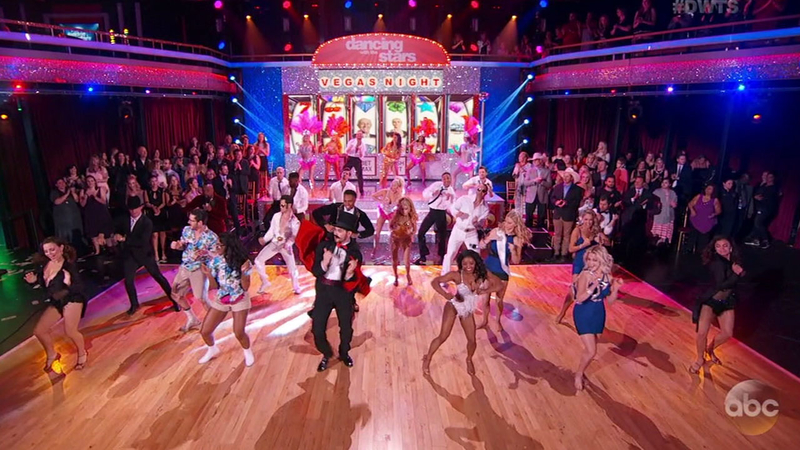 'Dancing with the Stars' week 3

LOS ANGELES -- "Dancing with the Stars" is gambling on a Las Vegas-themed show for episode three of season 24.

Some routines reflect actual Vegas shows and performers; others reflect the theme of Sin City.

Eleven couples started the night. But moving on for another week is just not in the cards for one of those stars!

Normani Kordei: 34 out of 40
How in the world do Normani and Val fly to Hong Kong right after last week's show (so she can join her group, Fifth Harmony), learn a tough foxtrot on the road, and then fly home and nail it? They are just that good already! The judges are both blown away and picking their jaws up off the floor. Head judge Len Goodman thought the routine was full of promise and joy; Carrie Ann Inaba told Normani she danced herself into another realm; and Bruno Tonioli called their dance the best of the night.

Nancy Kerrigan: 33 out of 40
Nancy had her work cut out for her by having to do a sexy Latin samba. Artem wants her to get comfortable with being sassy and saucy. Who better to help her learn some Latin moves than Ricky Martin himself (who has a new show in Vegas)? Artem totally geeks out when he meets Ricky (who was a childhood idol). Len loved her bouncing bum, and praised her hard work. He also called the dance the best of the season so far. The other judges were all thrilled to see a "proper" samba in the ballroom.

Heather Morris: 33 out of 40
Channeling Britney Spears is nothing new for Heather; she did it a few times on "Glee." But never in ballroom hold, backwards and in high heels! Maks is still on the injured list so she's dancing with Alan while Maks Skypes in from his treatment. (Maks WILL be back!) Len praised the amount of content and hold in their tango; Julianne Hough likes the connection of this new team; and Carrie Ann sees much improvement.

Simone Biles: 32 out of 40
The Olympian drew the lucky straw and was assigned the quickstep which is the perfect dance for her - fast and happy! She only kind of, sort of, knew who Elvis Presley was, but learned more about the King after being assigned the song "Viva Las Vegas." The judges were happy with the overall routine and think her technique is spot on; however, they all want a little more emotion and character in the dances.

David Ross: 31 out of 40
This wholesome, World Series-winning, father of three is learning the moves of "Magic Mike." Yes there's a little embarrassment at the beginning, but the choreographers of the Vegas show tell him it's all about confidence and he just needs to "own it." Ross tells his kids: when Daddy's dancing tonight, it's time to go to bed! Bruno thought the dance was entertaining but still well thought-out; and Carrie Ann was actually blushing!

Rashad Jennings: 28 out of 40
Like Nancy, Rashad got the tough Latin dance the samba. Emma says she is not going to go easy on her pro football partner because she knows if she pushes him he can get to the next level. Rashad's got the hip action and the rhythm but he was a little off his mark this week. All the judges seemed to feel bad that they had to criticize the previously strong couple. Julianne blamed the song choice; Bruno thought things weren't as clean and precise as they had been; but Len told Rashad not to worry... he'll be back!

Erika Jayne: 26 out of 40
The popular Vegas circus-like sideshow "Absinthe" is the inspiration for Erika's jive. Unfortunately it's one of the toughest dances on the show. There's plenty of style and effort, but the quickness got the best of her. Julianne thought some moments were "wobbly"; Len wanted a little more jive content; Bruno and Carrie Ann both mentioned that the couple was out of sync a bit but praised Erika's flexibility.

Nick Viall: 26 out of 40
Nick was very disappointed with himself last week and felt he really didn't give all he could. Mainly, he doesn't want to let Peta down, or waste the opportunity he's been given to really learn how to dance. All the judges complimented Nick on his improvement, with Carrie Ann adding she can't wait to see where he goes from here.

Mr. T: 24 out of 40
Mr. T feels like his best is yet to come and Kym thinks the foxtrot is just the right dance to bring out a new side of Mr. T. He has fond memories of Las Vegas... he knew the Rat Pack! That's the era he channels and he really is a different person. Julianne thought the dance fit him to a "T"; Len called him a "gentle giant"; and Carrie Ann told him to keep working the audience because they are firmly, and loudly, in his corner.

Bonner Bolton: 24 out of 40
Why would the DWTS folks assign Bonner a dance with elements he physically can't do? That's a puzzle. His previous injury prevents him from doing any lifts or big tricks and Sharna tells him that's something you really need for the Charleston. The cowboy's very frustrated with this dance but Sharna tells him frustration only means he cares. She's such a good coach! The judges realize his limitations but still have to score what they see and they all wanted to see something sharper and with more character.

Charo: 24 out of 40
Charo confesses that she needs to think a little more before she speaks. She's trying not to antagonize the judges, or the host, or the audience, which may have happened a bit in the first two weeks. The tamer Charo offered a foxtrot the judges called lovely, refreshing, demure and sweet: all new adjectives for Charo in the ballroom!

Spoiler Alert: Who went home?
There was just enough time at the end of the two-hour show for a quick elimination. Charo and Keo and Nick and Peta were the two couples in jeopardy. Sadly, the Cuchi-Cuchi is leaving the ballroom and Charo is the celebrity sent home.