'Dancing with the Stars' sees its first elimination 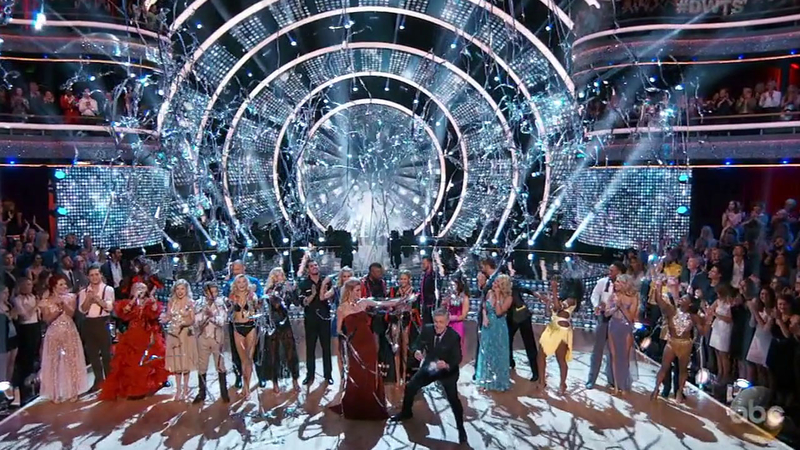 'Dancing with the Stars' sees its first elimination

LOS ANGELES -- Round two of "Dancing with the Stars" offers the first elimination of season 24. But before we get to that sad news, here's a rundown of the night's dances, from highest score to lowest:

Normani Kordei: 32 out of 40
The "Fifth Harmony" singer had a wild week; she and partner Val Chmerkovskiy flew to Japan immediately after last week's show where she joined the other women on tour. They squeezed some cha cha lessons in between the shows, and actually flew back just a few hours before DWTS. The schedule worked for her because she came out full-steam ahead. Head judge Len Goodman appreciated that she didn't take the easy way out; and Carrie Ann Inaba said she felt like when she watches Normani she is watching a strong and sexy woman with true star quality.

Rashad Jennings: 32 out of 40
The football star seems to be the celebrity who most understands you need to not only learn each dance routine but also get into a character. He had no problem channeling some raw emotions with his Viennese waltz. He told Emma Slater he'd had a bad breakup in the past but he wasn't afraid to be vulnerable. Julianne Hough was swooning and praised him for leading Emma in the dance; Carrie Ann thinks he has beautiful balance, and that he's holding Emma the way all women want to be held.

Heather Morris: 30 out of 40
We all saw the video on social media or "Good Morning America" - Heather's partner Maksim Chmerkovskiy injured his calf in a big way and can't dance. Alan Bersten from the troop stepped in and, in one day, learned the routine and helped Heather earn a good score. Maks is questionable for the next week or two. As for the judges, Julianne, Bruno and Carrie Ann each gave them an 8 and high praise; Len was the odd man out with a 6 saying the routine had too much hip hop in it.

Bonner Bolton: 29 out of 40
Len is scoring tough this week! Bonner and Sharna Burgess had a lovely Viennese waltz (mixed with a little of his Texas two-step) and again it was Len who rained on Bonner's parade with a 6. The other three enjoyed the simplicity, connection and elegance the couple brought to the ballroom. Len thought the dance was too timid.

Simone Biles: 29 out of 40
It's a bit of déja vu to Laurie Hernandez last season; these relatively young women are uncomfortable when they have to be sexy. Sasha Farber wants her to be a bit rawer with the cha cha but those movements come with giggles during the rehearsal period. Sasha lets her know if she doesn't commit to the character, she's just simply doing steps. Carrie Ann called Simone a sparkplug; Len said she's full of vim, vigor and vitality; and Julianne said what she was beautiful but she just didn't feel anything.

Erika Jayne: 28 out of 40
Erika was not happy with the judges last week and she is not shy about saying so. She's comfortable in her own skin and wants to bring her personality to each and every dance, no apologies. Luckily, Gleb Savchenko agrees and this week choreographs a foxtrot that combines her sexiness with sophistication. The couple earned straight 7s across the board with Julianne saying she admires Erika's confidence, and Len saying the dance had glitz, glamour, and style.

Nancy Kerrigan: 28 out of 40
Nancy's partner Artem Chigvintsev is over the moon that he's partnered with an athlete who knows how to, and wants to, train. He gives her one compliment after another during rehearsal and she can't handle it. Nancy says she was judged her whole life and it's hard to focus on the good. The judges were pleased with their cha cha; Len said it was nothing fancy but nice and Julianne loves watching this pair together.

David Ross: 27 out of 40
The baseball great channeled his inner self in junior high to "Bust a Move" with his cha cha. He and Lindsay Arnold have an easy chemistry and lots of energy. However, this week all the judges thought there wasn't quite enough content in the routine. Charisma can only get you so far; footwork has to play a part in this too!

Charo: 25 out of 40
Charo once again takes over the ballroom when she's out on the dance floor. Host Tom Bergeron might have to run and hide! Charo is emotional about performing the paso doble; it's a dance that's close to her heart and her heritage and she says she is dancing it for her parents. Len liked the passion and drama; Carrie Ann told Charo she worshipped her; Julianne thanked her for being an inspiration; and when Bruno told Charo she was unleashed like a tornado, she stopped him and said she can't understand what he's saying with his thick accent!

Nick Viall: 25 out of 40
Nick has to search a bit to find his graceful side but it does come out. Peta Murgatroyd is teaching him a foxtrot that is masculine, but pretty. Carrie Ann thought there was a lot of content in the routine; maybe too much. Len, Julianne, and Bruno agreed that they should focus on the "less is more" theory and make a simpler routine stronger.

Mr. T: 22 out of 40
Mr. T wasn't at all mad that the judges gave him low scores in week one; he thought he deserved it. But he tells Kym Herjavec he's been a fighter all his life and he's not stopping now. They've been assigned the paso doble, to the "Rocky III" theme "Eye of the Tiger," which already makes things easier for him. His motto this week: practice makes better, not perfect. Len thinks Mr. T is the spirit of this show and saluted his efforts; all the judges said they saw improvement.

Chris Kattan: 22 out of 40
Chris alluded to a neck problem last week but we had no idea. This week he showed Witney Carson (and the rest of the DWTS nation) an X-ray that revealed his back is full of pins. He was brought to tears because he's reminded how he can't really do physical comedy anymore; Witney cried thinking about his courage. The couple does a jazz routine that is miles ahead of last week's dance. All four judges told Chris they were entertained and he was much improved.

The Elimination (Spoiler Alert!):
The last 30 seconds of the show saw a fast and furious elimination. Chris and Witney and Charo and Keo were told they were in jeopardy; but in the end, it was Chris Kattan's time to leave the ballroom.