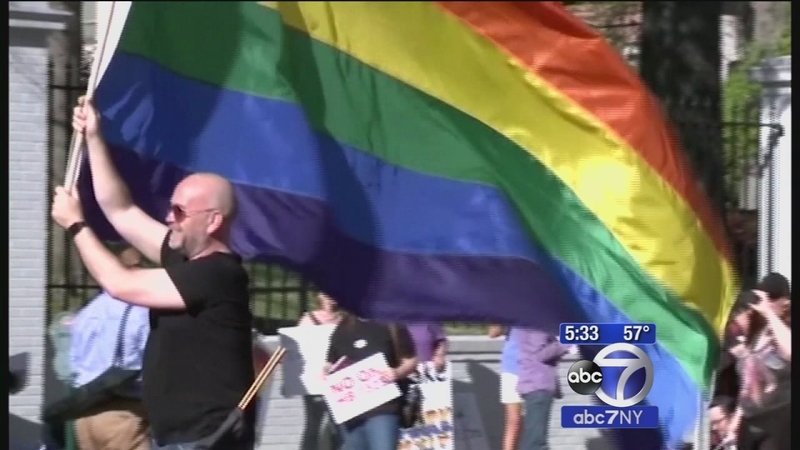 GREENSBORO -- North Carolina Gov. Pat McCrory said Tuesday he wants to change a new state law that prevents people from suing over discrimination in state court, but he's not challenging a measure regarding bathroom access for transgender people.

His announcement comes as fallout widens over the law he signed last month that would limit protections for gay, lesbian and transgender people. Critics of the law called his statement a step in the right direction, but not enough.

While McCrory's executive order extends further protections to state employees, it leaves intact provisions of the state law that limit protections for the LGBT community in the general public.

McCrory said he's using an executive order to expand the equal employment policy for state employees to include sexual orientation and gender, as well as affirming private businesses' rights to establish their own bathroom policies.

He also says he will ask lawmakers for legislation allowing people to sue in state court over discrimination. That right was wiped out by the law.

But he said his order will maintain gender-specific restroom and locker room access in government buildings and schools. He once again condemned a Charlotte ordinance passed earlier this year that allowed transgender people to use bathrooms corresponding to their gender identity, calling it "a solution in search of a problem."

The state law was passed partly in response to the Charlotte measure.

But it went further than repealing the Charlotte law, overruling LGBT antidiscrimination measures passed by local governments statewide. It also excluded sexual orientation and gender identity from the state's antidiscrimination policy. The law also required transgender people to use the bathroom corresponding to the sex listed on their birth certificate.

McCrory acknowledged outcry over the law, saying he'd listened to "feedback" from people for several weeks.

He said that "based upon this feedback, I am taking action to affirm and improve the state's commitment to privacy and equality."

Chris Sgro, executive director of Equality NC, said McCrory's order is a step in the right direction but still "doubles down" on some of the most problematic parts of the law.

"If the governor is truly committed to non-discrimination and wants to undo the harms done by House Bill 2, this is just the beginning of the conversation," Sgro said in a written statement.

The head of the state ACLU, which has filed a lawsuit challenging the law, said the governor had made "a poor effort to save face."

"With this executive order, LGBT individuals still lack legal protections from discrimination, and transgender people are still explicitly targeted by being forced to use the wrong restroom," said Sarah Preston, the group's acting executive director for the state.

In an interview with The Associated Press, McCrory said he saw no need to change the law he signed March 23 beyond repealing the state court discrimination provision.

He said his actions Tuesday "will not satisfy all the critics who have a litmus test of purity on each side of this issue ... my job is to find a commonsense solution to where we have conflicts between privacy and between equal rights."

As for the equal employment protection for state employees, McCrory said he already believes state government protects LGBT workers but "I thought it needed to be clarified to the citizens of North Carolina."

Attorney General Roy Cooper, a Democrat challenging McCrory this fall, is opposed to the law and announced last week he won't defend it in court. Cooper said in a statement the order "is a day late and a veto short" and doesn't change that last month's legislation "has written discrimination into the law."

McCrory's announcement came hours after Deutsche Bank said it will halt plans to add 250 jobs in North Carolina because of the law. The German bank with a large U.S. presence had previously planned to add the jobs through next year in Cary.

Co-executive officer John Cryan said in a news release that the bank may revisit the plans later. The bank currently employs 900 people at a Cary software development center, and it said it plans to sustain that existing operation.

Previously, PayPal reversed plans to open a 400-employee operation center in Charlotte, and more than 130 corporate CEOs signed a letter urging the law's repeal. Some states and cities have restricted public employee travel to North Carolina.

Several groups have canceled planned conventions or gatherings in the state.

Ryan Smith, a spokeswoman for the Greater Raleigh Convention & Visitors Bureau, said five groups totaling about 1,000 attendees have already canceled. She said in an email the canceled events would have brought $730,000 to the area.

Smith said another 16 groups are considering cancellations of events expected to have a $24 million impact.

The B Lab, a group organizing a gathering for socially conscious companies, says that it's relocating the event that was expected to bring 550 attendees to Durham in October.

Charlotte tourism officials have previously said that several events were canceled around that city.

Rock star Bruce Springsteen canceled a Greensboro show over the weekend because of the new law.

Jimmy Buffett, meanwhile, said that he considers the law "stupid" but will proceed with scheduled shows in Raleigh and Charlotte this month. He said future dates would depend on whether the law is repealed.

Buffett wrote on his blog that tickets to his shows sold out long before the law was enacted. "I am not going to let stupidity or bigotry trump fun for my loyal fans this year," he said.