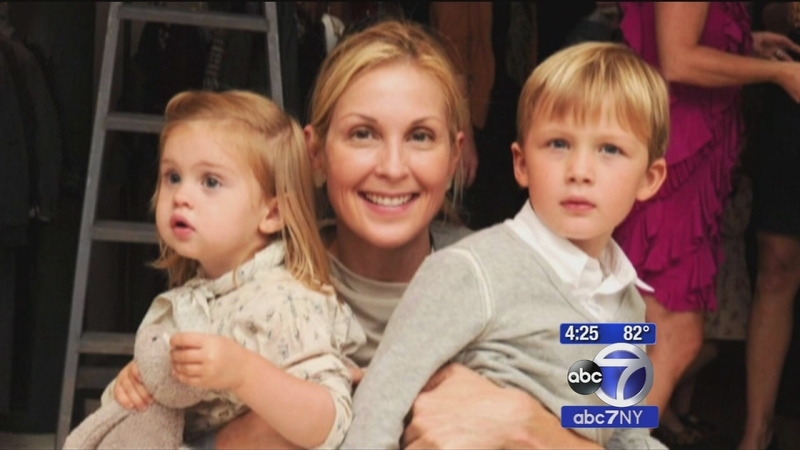 Rutherford said goodbye to her two children in New York Tuesday after a judge ordered them returned to their father, Daniel Giersch.

"What the judge did yesterday was shocking, illegal, and abusive to my children," the statement began. "Without any legal authority, a judge from the lowest ranking court in the state court system violated the highest ranking federal constitutional rights of my American citizen children."

Rutherford appeared at Manhattan Supreme Court, dressed all in white with her blonde hair wrapped in a chignon. She didn't bring her children, 6-year-old Helena and 8-year-old Hermes, which was a violation of the judge's order.

Giersch's mother, Renita, came to greet them and was seen smiling when a lawyer whispered what the judge had ruled. Renita Giersch and members of the media were barred from Judge Ellen Gesmer's court during arguments.

"The children's father didn't care enough about his children to be here himself," Rutherford's statement read. "Contrary to his many false claims, he, like all German citizens, can come to this country anytime on his German passport. But he didn't bother."

The children were eventually brought to court, and cries of joy were audible when the grandmother and children reunited outside the tiny courtroom. Rutherford was seen fighting back tears as she was quickly led from the courtroom.

The children left the U.S. to join their father in Monaco later Tuesday.

Rutherford filed for divorce six years ago, with both parents to share custody. But when Giersch's U.S. VISA was revoked, a California judge ruled their children should live with their father.

She concluded her statement with a shot at the judge, saying, "As for Judge Gesmer, she has to live with herself, and if she has a conscience, I suspect she will not sleep well, ever again."

Here is the full text of Rutherford's statement:

What the judge did yesterday was shocking, illegal, and abusive to my children. Without any legal authority, a judge from the lowest ranking court in the state court system violated the highest ranking federal constitutional rights of my American citizen children.

Judge Ellen Gesmer effectively arrested my children, claiming she had authority under habeas corpus to take them into custody because of a foreign country's court order. But the law is clear that a New York judge cannot enforce any order from a foreign country unless and until the foreign order is "registered" in the United States. Not only was there no Monaco court order registered in New York, no government official from Monaco asked the New York judge to register an order, or take any action against me or my children.

Knowing she had no authority, Judge Gesmer seized my children and their U.S. passports, and forced them to leave the United States and reside in Monaco, a country where neither they nor I, nor even their father, has citizenship.

The children's father didn't care enough about his children to be here himself. Contrary to his many false claims, he, like all German citizens, can come to this country anytime on his German passport. But he didn't bother.

I did my best to comfort the children, but there are no words to help children understand why a judge would be so cruel.

We asked the State Department for help, but they claimed there was nothing any federal official could do. That response was curious given that non-citizen children receive help from the U.S. government all the time to ensure that they are not forced to leave the United States. We pointed out that under the Hague Convention, which was the basis for my ex-husband's filing, the State Department must be advised, and it must consent to the removal of American children. The State Department claimed it had no role, and there was nothing it could do to protect the illegal removal of American children from their own country, even when they were being forced to live in a nation where neither the children nor either parent has citizenship.

When the children's father filed papers this week demanding that the children be taken into custody, he told Judge Gesmer there was an emergency and that he did not know the whereabouts of the children, or whether they were safe. That was a lie. I told him in writing repeatedly that the children were in New York, safe with me. He Skyped with the children and talked to them many times during the periods when he claimed he did not know the their whereabouts, or whether they were safe. It was all lies to persuade the court to issue an emergency order. The court went along with his false emergency claim and ordered the lawyers to serve me their papers by 3 p.m. The judge gave me until 4:30 p.m. to respond. I received the nearly 100 page filing just before 4:30.

The following morning, I filed my response explaining the myriad legal reasons why the judge had no authority to take custody of my children or their U.S. passports, much less to command them to leave their own country. The judge did not listen to one word I said and instead demanded that the children immediately be taken from my custody, and handed over to the lawyers for delivery to an airport. It was the most cruel act against a child I have ever witnessed in my entire life and the fact that it happened to American children at the hands of an American judge, in a United States courtroom is just inconceivable.

I am including below some of the points we raised in court, so the public can see clearly how illegal and irrational the court's decision was.

1. JUDGE GESMER HAD NO AUTHORITY TO FORCE AMERICAN CITIZENS TO LEAVE THE UNITED STATES

No official in any branch of government, including a judge, has authority, under any circumstances, to order an American citizen to leave the United States and reside in a foreign country. This principle has been the law of the land since 1967. Afroyim v. Rusk, 387 U.S. 253 (1967) (The right of an American citizen to physically remain in the United States is absolute and cannot be "shifted, canceled, or diluted at the will of the Federal Government, the States, or any other governmental unit.")

2. THE CHILDREN ARE NOW AND ALWAYS HAVE BEEN EXCLUSIVELY "HABITUAL RESIDENTS" OF THE UNITED STATES

My ex-husband violated that agreement by filing papers in Monaco in 2014 to cause a court there to declare the children "habitual residents."

Judge Gesmer knew of the parental agreement, and the California order that forbade Monaco to declare my children "habitual residents," yet she forced my children to leave their own country based solely on that 2014 declaration in Monaco.

It is profoundly disturbing that a judge in an American court of law would denigrate this country's Constitution, and my children's precious citizenship rights, in favor of an illegal declaration from a foreign country, especially where no government official in that foreign country has expressed an interest in enforcing that illegal declaration, or otherwise forcing my children to leave the United States.

In fact, Monaco has yet to determine whether it even has jurisdiction at all over my children's custody. A hearing on that issue is scheduled for September 3. Which means Judge Gesmer forced my children to leave their own country based on an order from a country that not only expressed no interest in forcing my children to leave the United States, but has yet to determine that it has any jurisdiction over the children at all.

This case is simple. My ex-husband and I, and the California court, agreed in 2012 that the children's court-ordered stay abroad would be temporary, and that they would reside with their father briefly, solely to accommodate him while he undertook to resolve his U.S. work visa problems. He did nothing whatsoever to resolve his visa issues for three years, while my children and I waited patiently for some U.S. court to say "that's enough time - the temporary period is over and the children must return to their own country either with their father or without him."

When both California and New York declined jurisdiction this July, the temporary period ended by force of law because no court in this country had an order in place rehiring my children or me to do anything. Never in my worst nightmares did I envision the children's father to angrily, and unlawfully take legal action in New York to cause my children further pain, by demanding their forced exile beyond an already too long period of three years. Nor did I envision a judge my own country violating the Constitution and adding to my children's suffering by indulging his tactics.

Judge Gesmer lacked the capacity, the will or the knowledge to do the right thing, but I will continue to fight for my children, and one day I will land in the courtroom of a decent judge. My children ask me all the time if I am still fighting for them, and I always tell them the day will never come when I say "no."