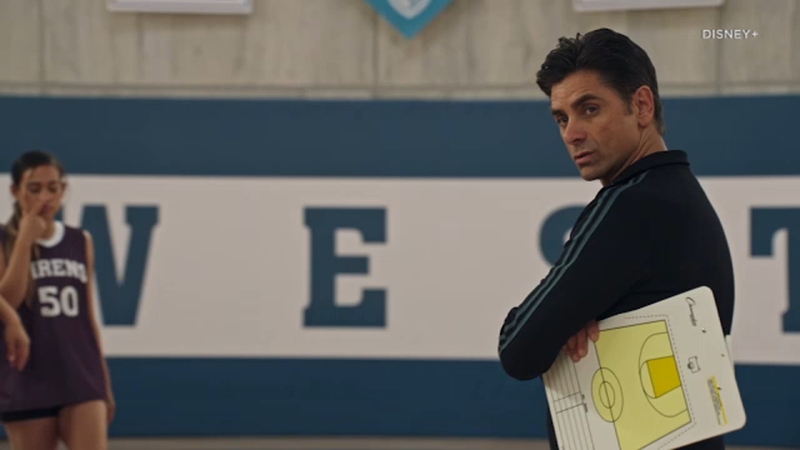 HOLLYWOOD -- John Stamos wants you to know one thing: he is not a sports fan. But he finds himself on the basketball court for this latest role in the new Disney+ series, "Big Shot."

In "Big Shot," Stamos plays Marvyn Korn, a former NCAA basketball coach, kicked out of the league for bad behavior. The only job he can get after that: Head coach of the basketball team at an all-girl's private high school.

"All these girls stand up to him right away and it's great. I mean, they put him in his place the first scene. You know, 'Don't talk to us like that. You can't fat shame me. You can't say this.' And he goes, 'Whoa whoa whoa," said Stamos.

Everyone will be learning things here!

"And the reality of a character like Korn, you know, releasing his assumptions and connecting with these girls is, you know, it's--I think we hit it right," said Stamos.

If there is a bit of irony in John's casting, it's this.

"Anybody that knows me, I am the opposite of a sports fan," admits Stamos. "I know nothing about sports. I don't like sports. Someone always has to lose. And I thought, 'I've got to figure out how to play this coach."

His research included spending time with Jerry West and The L.A. Clippers.

"The first dumb thing I saw was about the Clippers being a college team, which they weren't, I guess," said Stamos. "And I said, 'Thanks for inviting me to rehearsal.' And he said, 'Son, it's practice, not rehearsal.' Dummy."

"Big Shot" was co-created by "Big Sky's" David E. Kelley. And Stamos says it's one of the best jobs he's ever had.